Rabat - Excitement builds in a middle class bar located in the city center of Rabat, as the two teams get ready for the 5:30 pm game in the Ivory Coast. 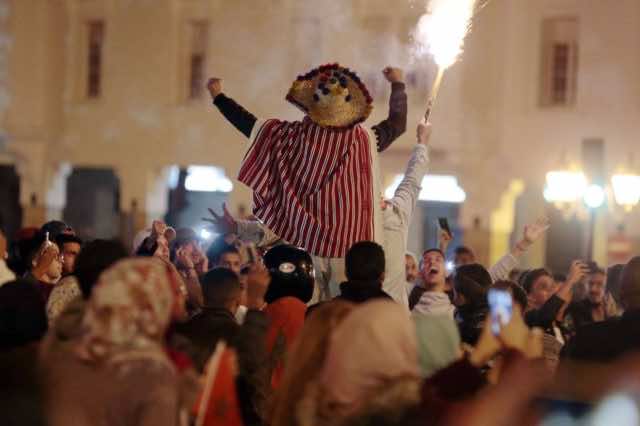 Rabat – Excitement builds in a middle class bar located in the city center of Rabat, as the two teams get ready for the 5:30 pm game in the Ivory Coast.

While the majority prefer to catch all the action sitting on benches of cafés or their couches, some die-hard fans have flocked to a less conventional and in fact “taboo” place: a local gloomy bar, in Hassan middle class district to enjoy the football camaraderie — and the drinks.

Hundreds of enthusiastic conversations converge in a cacophony of loud voices, talking about Moroccan politics, the Atlas Lions’ chances of victory, and a catch up on friends’ news, all competing with the patter of the game’s commentator that dominates the decibels.

Hakim makes his way through the warm bodies to order a drink, a Moroccan Flag special. He gives the bartender a MAD 50 bill and gets MAD 20 change, as his eyes scrutinize the other customers.

His odd looks are interesting, at the least. A scraggy beard frames his face recalling his years of hippie, leftist activism. Similar looks and beliefs are shared by the majority of the bar’s regulars.

Before the drink is poured, he runs into an overwhelming number of friends and acquaintances. His drink is already warm by the time he takes a sip of it. He shouts in dismay. Everyone laughs.

A friend of his seizes the occasion to get the crowd to laugh even harder.

While musing over his warm beer, Hakim, 26, a left-wing militant, feels a cloth laid over his shoulder, a Moroccan flag. The crowd laughs even harder.

“Woah! Is it the game or the beer that has suddenly made you a patriot?” a person shouts.  “Shut up,” he intervenes. “I’m just here to be with you guys.”

His words are of course not entirely true. Hakim shares the same excitement and anxiety as everyone else watching the game.

People continue to flock into the bars and the familiar customers are now joined by new ones, Moroccans, foreigners, men and women alike. The Atlas die-hard spirit seems to bring them all together.

Red and green stripes prevail among the outfits of the supporters. And the Atlas Lions scarves, flags, and T-shirts overwhelm the bar.

Ikram, in her mid-twenties, is one of the early comers. Dressed in an elegant work outfit, she occupies a table on her own, her appearance complementing the bar’s décor, a mixture of French and Moroccan furnishing. The small spaces between the seats hint at the intimacy that Moroccans enjoy and the bar offers. The walls, painted in white and red stripes, further stress the closeness and the Camaraderie the bar caters to.

Ikram isn’t drunk, but she enjoys giving the impression that she is. A beer in hand and eyes fixed on the screen, a man in his fifties interrupts her contemplative concentration and hands her his phone. “Dial in your phone number,” he demands.

The occurrence seemed to have caught the attention of all the costumes. Ikram stands and says loudly: “If the team loses I won’t give you my number; if it wins I’ll still not give you my number.” Her witty repartee causes the crowd to break into laughter.

Hakim, now the leading patron of the bar, steps in, pats the man on the shoulder and tells him in an amplified masculine tone: “My dear friend, go back to your seat. You lost the girl, at least watch the game and pray you win.”

As the two teams come out of the tunnel, shaking hands with each other, the fans fervently sing and clap along with the Moroccan anthem.

“Sing my friends, sing. Tonight the victory is ours,” a supporter shouts; the others laugh in agreement.

It’s 5:30 p.m. and all eyes are fixed on the screen. The game has been a strenuous battle from the very moment the whistle blew.

In meditative concentration, the patrons are loud in their vocal support of the Lions and joyously singing football anthems.

The atmosphere is electrifying and tense. Beer cans are gulped one after the other. “I’m already tired,” said the waitress. “I have to run up and down. Everybody is either extremely excited or drunk. Two customers have just left without paying me. I now have to pay for their drinks out of my own pocket.”

“They ordered two 50 ml beers –that is MAD 74, sh*it,” she exclaims before she herself runs to serve another table.

The game was bound to be fast and furious. With each near-misses, the drama and tension were inevitable, until the long awaited moment; “GOAL! “everybody shouts in synchronicity.

The crowd stands in an abrupt manner, slamming their beers on the tables, their eyes wet from both laughter and tears.

Two strangers, sharing a table, stand, gaze at each other, and spontaneously hug and jumping up and down feverishly, crying “Russia, Russia, Russia.”

It takes the crowd about 15 minutes for its excitement to calm down. The cigarette smoke twists in graceful curls, illuminated only by the age-speckled bar lights, as the waitress, now clothed in a Moroccan flag, serves the drinks, now at ease, appearing to be much more energetic and happy than before.

One goal is not enough. The supporters still thirst for more and strive to see the opponents defeated.

Along with the lingering smell of alcohol and cigarettes, the scent of victory hovers in the air. All kinds of emotions stir, as the men joke speak to each other constantly, the crowd roars, and the drinks continue to flow.

Strange cries echo in the bar with each missed score from the home team and each potential goal from the opponents. And then it happens again, the Atlas Lions scored a second goal in the same half. The whoops magnify. The Moroccan flag is hoisted in the air, and vodka is served as the crowd is now sure Morocco will fly to Russia.

“Russia and Putin are waiting,” the young and old come together and chant throughout the half-time.

A fan picks up his phone and calls a friend. “We ****ing did it. I told you we would. You lost the bet. A week’s lunch is on you,” his words are followed by frenzied laughter.

The commentator announces the start of the second half. The crowd, perpetually excited and perpetually anxious, keep their eyes on the screen.

Abruptly, a man, barely keeping his balance stands and yells: “Just end the game, god damn it. It’s clear that we won.” His eagerness isn’t reciprocated by the fans. “Shut up. We want another goal,” voices from invisible corners yelled.

The host announces the end of the game. Morocco wins two-zero. The fans breathe a sigh of relief across the bar; the cries, the dancing flags and more cans of beer follow.

The celebrate the victory with shots of vodka and talk about buying tickets to Russia. Some customers leave immediately to share their happiness and delight in the streets. Others stay, restless in their drunken haze and newly renewed sense of patriotism and love for the Atlas Lions.