Flood-Beaubrun made her remarks on the Moroccan plan on the sidelines of the “World Congress of Families,” which took part on the Caribbean island on November 17 and 18. The two-day event saw the participation of Morocco, whose leadership in different sectors was lauded by Flood-Beaubrun.

The official specifically commended the development projects launched in Morocco’s southern provinces, citing “development at all levels” during her participation in Dakhla’s Crans Montana Forum.

Earlier this year, the President of the Senate of Saint Lucia, Andy G. Daniel, expressed his support for Morocco’s proposal, describing it as “a clear manifestation of the will, resolution, and determination of the populations to establish peaceful coexistence.”

In a communiqué received by MAP, Daniel called the Moroccan plan “reflective, representative, reliable, and responsible,” adding that  he had “no doubt[s]” that the Moroccan Plan could “meet the hopes and desires of the entire population” in the kingdom’s southern provinces.

Flood-Beaubrun has also expressed her country’s ambition to cooperate with Morocco in fields such as agriculture, healthcare, and tourism.

According to Minister Flood-Beaubrun, the island nation aims to deepen its cooperation through benefiting from Morocco’s experience and leadership in different sectors, particularly the agricultural field.

In addition to agriculture, Saint Lucia seeks also to learn from Morocco’s health sector. “We currently want to expand and deepen this cooperation to integrate the health sector, and benefit from the expertise of Morocco in this area,” said the official.

She has also noted her country’s existing educational cooperation with Morocco, stating that several students from Saint Lucia are already pursuing higher education in Moroccan universities. 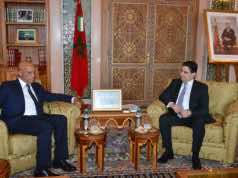