Rabat - The fatal stampede that erupted last week while food aid was being distributed in Sidi Boulaalam in the Essaouira province is still hitting the headlines. The incident, while unprecedented in recent history, did not come out of nowhere. A reportage by Moroccan news outlet H24 explores the poor living conditions and the lack of development resources and employment in the region. 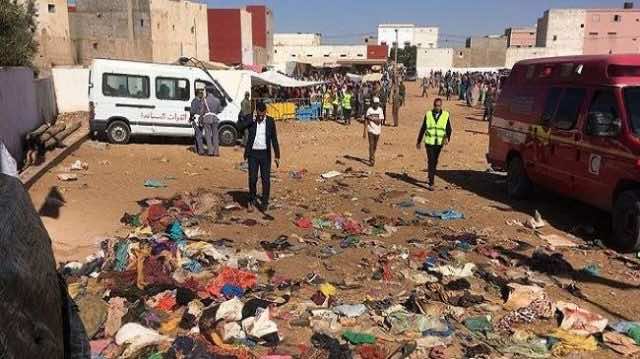 Rabat – The fatal stampede that erupted last week while food aid was being distributed in Sidi Boulaalam in the Essaouira province is still hitting the headlines. The incident, while unprecedented in recent history, did not come out of nowhere. A reportage by Moroccan news outlet H24 explores the poor living conditions and the lack of development resources and employment in the region.

The horrific stampede killed 15 people, the majority of whom were women. At least 40 others were injured.

The news platform staff lands in the area at around 8 p.m. just a day after the stampede. The authorities asks them to leave and come back the next day, saying it is dangerous to stay over the night as “there is not enough electricity” in the spot.

Before complying with the orders of the authorities, the staff meet Mohammed, a 36-year old local grocer.

Mohammed explains the “dire situation” in the town: “You see, I will be 40 soon. I am not married yet, I am collapsing here, but I do not have a choice like anyone else of my generation here. Most of us left school at age 11 already.”

Then a friend of Mohammed and unemployed high school graduate, Daoud, comes in and tells the reporters,  “You are shocked due to what happened because death is a serious thing in cities. People here have nothing to lose.”

One of the journalists responds that the death of loved ones is “something difficult in whatever situation.” The journalist’s argument, however, does not convince Daoud, who says, “You will certainly go to meet the family of [stampede victim] Mi Lakbira. Then you will see with your own eyes that death is very normal here.”

After spending a night in Essaouira, the journalists go back to the town, where they meet Daoud by a chance in a cafe. The young man is not shy about sharing his experience as unemployed and the poor living conditions for those who live in the town. “I work from time to time in Marrakech as a bricklayer, and I spend the rest of my days here going back and forth between cafes and home,” he said.

Daoud tells the journalists that he has three illiterate and unmarried sisters, explaining that he could not enroll in a university in Marrakech after he obtained his baccalaureate as his father, who is a farmer in the town, did not have enough money. Their poverty resulted from the long years of drought that affected the region, he added.

Daoud explains that the people of the town live mainly from their land. “The olive trees do not give much here and agriculture is difficult to start because there are no means, no dams, [and] very few tractors, because they are very expensive for a normal farmer.”

H24 says that the Sidi Boulaalam inhabitants do not have access to drinking water. They add  that when they were heading to douar Guenidil, they noticed that “there is only a single water well, no dispensary, but mostly very dry land, in a period that is supposed to be an agricultural month.

The son of Mi Lakbira, Hamid, receives the H24 journalists. The man says he is surprised that the journalists came, wondering how people were able to know about what happened since “nobody among us has a phone and internet does not work here,” he said.

After crying before the journalists about the death of his mother, Hamid talks about Abdelkebir Hadidi, who runs the charity that was distributing food at the site of the incident. “We have tried many times to create an association. The young people of the town want to do it too,” he says, adding that every time they try to so “the authorities ask us to calm down. This is why I would never part with my sebsi [a traditional Moroccan cannabis pipe] it really calms me,” says Hamid with a sense of humor.

“I already cried enough yesterday. It was the shock of the death it is normal. I laugh, then I cry just afterward.” Speaking about the death of his mother, Hamid says that “she is not the only woman dead anyway, and this is not the first time. Children die every year here. There is no hospital. I cannot help it, Hamdoulah [thank God] anyway.”