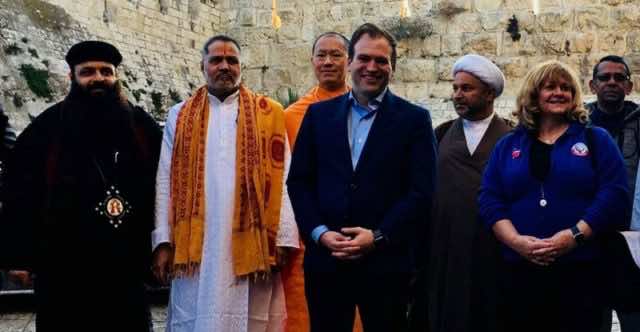 Rabat – A delegation from Bahrain has reportedly travelled to Israel for a four-day visit, amid widespread demonstrations denouncing Washington’s decision to recognize Jerusalem as Israel’s capital, reported the Israeli channel Two on Saturday December 9.

The delegation, which was sent upon orders from the Bahraini monarch Hamad Bin Isa Al-Khalifa, includes 24 religious figures of a group called “This is Bahrain,” to deliver a “message of peace and brotherhood to Israel.”

“His Majesty King Hamad has sent us with a message of peace to all places around the world. The Shia in and outside Bahrain do not hold any animosity or hatred towards any faith or doctrine,” Sheikh Fadil al-Jamri told local media.

“We are visiting Jerusalem today with our message of peace and to see this historic religious site,” he added.

According to the Hebrew channel, the mixed Sunni-Shia delegation accompanied by an Israeli Foreign Ministry delegation, conducted a field tour in Jerusalem’s old city, without disclosing the places and sites visited.

“Although the Bahrain Foreign Ministry condemned Trump’s recent decision, the delegation did not cancel the visit,” the Israeli channel said.

Bahrain’s foreign ministry has warned that the move “threatens the peace process in the Middle East and impedes all initiatives and negotiations towards a lasting solution.”

However, the Foreign Ministry’s statement does not reflect King Al Khalifa’s overall position regarding Israel and Jerusalem.

Israeli media reported three months ago that King Al Khalifa condemned the hostility of Arabs against Israel, during his participation in a memorial on “Jewish genocide” organized by the Jewish center in Los Angeles in the the United States.

The Bahraini monarch also asserted that Israeli citizens can visit his Gulf state and called for diplomatic ties to be established between the two countries..

In addition, Israeli Prime Minister Benjamin Netanyahu had previously said “developments in Israel’s ties with moderate Arab countries are in an unprecedented situation,” and that the relations are improving.

“The scale of our cooperation with Arab countries has yet to be set, but it is better than ever. These big changes are ongoing despite Palestinians. Unfortunately, the Palestinians have not changed their minds to reach any solution,” Netanyahu said.