Rabat - A Moroccan police officer was injured when a series of clashes erupted on Saturday afternoon near the Ouled Ziane bus station in Casablanca between sub-Saharan migrants and security elements. 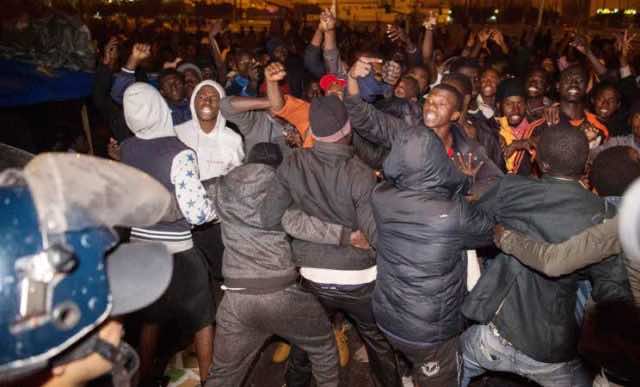 Rabat – A Moroccan police officer was injured when a series of clashes erupted on Saturday afternoon near the Ouled Ziane bus station in Casablanca between sub-Saharan migrants and security elements.

Altercations between security forces and sub-Saharan migrants broke out after migrants tried to leave a gathering place they were put in by the authorities, before they were planned to be moved permanently from their camps set up in a garden near the Ouled Ziane bus station.

When the sub-Saharan migrants tried to escape the “siege,” as they described it according to news daily Al Ahdath Al Maghribia, clashes broke out, which resulted in the injury of a police officer.

The newspaper added that the authorities have relocated the migrants but haven’t found a  way to shelter them in places that would respect their dignity.

Before Saturday’s clashes, other alterations erupted on Friday between Moroccan young people from Derb Lekbir neighborhood and sub-Saharan migrants when police came to move some of the migrants from the Ouled Ziane station, where violent clashes broke out on November 25.

Some sub-Saharan migrants shared with Al Ahdath Al Maghribia their “suffering” after they were besieged the authorities. The migrants said they were not allowed to use the bus station toilets and were threatened to be moved to the southern Moroccan city of Dakhla if they didn’t comply with the authorities’ orders.

Authorities told the newspaper that the clashes erupted after sub-Saharan migrants refused to be removed from the garden near the bus station. The refusal resulted in clashes between a group of young people living in the Derb Lekbir neighborhood and sub-Saharan migrants. Authorities blocked traffic in the Ouled Ziane avenue, as the two sides were throwing stones at each other.

Such incidents were expected by some activists. According to Bilal Jouhari, the communication manager for Anti-racist Group for the Defense and Assistance of Foreigners and Immigrants (GADEM) said after the November 25 clashes that the incident was predictable, given the treatment of migrants by Moroccan authorities.

“It was apparent and it did not shock me, to be honest,” said Jouhari. “Bringing people by force here while the only thing they want is to reach Europe is not the right thing to do. They do not want anything from Morocco. They are not here to regularize their status. They are here to leave for Europe.”