Rabat - Maroc Telecom’s move to expand its market in Africa has already borne much fruit, the latest of which is the award it received at Telecoms Review Excellence Awards 2017 in Dubai last week as the "Best African Operator." 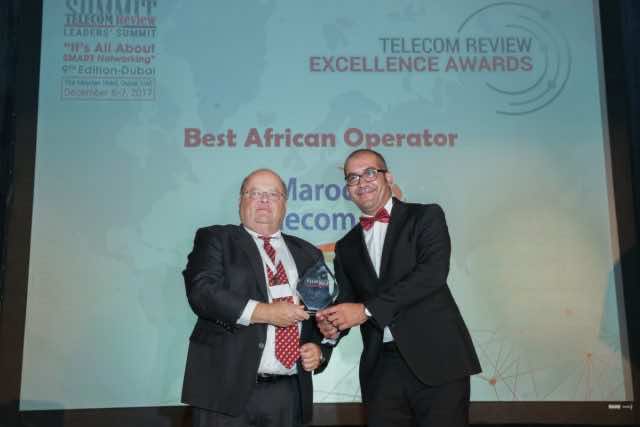 Rabat – Maroc Telecom’s move to expand its market in Africa has already borne much fruit, the latest of which is the award it received at Telecoms Review Excellence Awards 2017 in Dubai last week as the “Best African Operator.”

With 56 million customers, including 50.7 million mobile customers, nationally and continentally, Maroc Telecom has snatched off the attention of the awards jury, who named it the best in Africa.

Maroc Telecom has also invested in major projects for the development of telecommunications in Africa, including the Trans-African terrestrial cable project, which extends over 5,300 kilometers from Morocco to Burkina Faso, via Mauritania.and Mali.

In the last decade, Maroc Telecom, has invested nearly EUR 6 billion in the last decade for infrastructural modernization projects and the improvement of the quality of its services in Africa.

This policy has proven fruitful. In the third quarter of 2017 revenue generated in African subsidiaries increased, amounting to MAD 11.6 million, up by 1.1 percent compared to 2016.

In the third quarter alone, revenue growth at subsidiaries accelerated by 4.7 percent due to gains in market share and substantial investments to support the growth in voice call and data usage.

“The implementation of the massive investment plans and modernization of the new African subsidiaries is continuing and has already started to bear fruit in terms of growth and contribution to the Group’s performance,” assured Abdeslam Ahizoune, chairman of the company’s executive board.

The giant’s earnings before interest, taxes, depreciation, and amortization amounted to 8.8 million in the third quarter of 2017, an increase of 0.3 percent compared to the same period of the previous year, which was at MAD 8.1 million.

The telecommunication giant also plans to deploy a subsea cable on the Atlantic coast. This initiative seeks to combat the digital divide, which creates a gap between demographics and regions that have access to communications technology and those that don’t or that have restricted access.

The Telecoms Review Excellence Awards 2017 ceremony was chaired by several players in the telecom sector of the world.