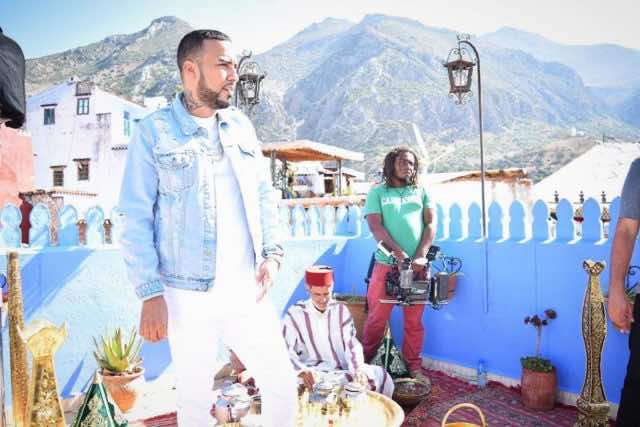 The 33-year-old Casablanca native never hides his love for Morocco, the country where he was born and grew up until the age of 13 when he and his family immigrated to the United States.

French Montana continuously pays public tribute to Morocco through his song lyrics, music videos, and social media. Privately, he also keeps in touch with his roots: he speaks Moroccan Arabic and professes his love of Moroccan singer Cheb Hasni and the Casablanca football team, Wydad.

He completed filming the video “Famous” last summer in Chefchaouen, Arabic for “blue pearl.” Montana recruited Director X for his latest video, the man behind many videos for Rihanna, Kendrick Lamar, and Drake.

The video ends with a tribute to his grandmother, who died in 1988 and also includes images of the cemetery where she is buried. French Montana shared an emotional photo documenting the reunion for his fans via Instagram:

Can’t come to the mother land without visiting my grand mother land !! My uncles and aunts hug me just to smell your scent appreciate u raising me right ????

Last October, French Montana announced on his Instagram that he would the launch of a project with the NGO Care Morocco to improve the school conditions of young Moroccans from disadvantaged rural and urban areas, with details forthcoming.

I Always Say “If You Can’t Be Rich At Heart You’ll Never Be Rich!” . I’ll Be Announcing Something Amazingly Special “Care Morroco ” I see my face in all their faces ?? you never know what helping is .. until you help someone who can’t help themselves. @_districta