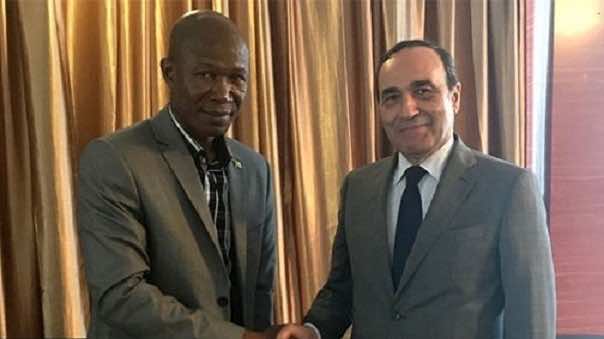 The Kingdom’s Agenda includes Morocco’s bid to join the Economic Community of West African States (ECOWAS), one of the continent’s foremost economic organizations.

A statement from the House of Representatives confirmed that Habib El Malki’s meeting with the Liberian Speaker last Saturday occurred on the sidelines of Liberia’s  inauguration ceremony for president-elect and former football star George Weah. El Malki represented King Mohammed VI at the inauguration. During their exchange, Chambers expressed his unbending support for Morocco-Liberia relations, describing their history of warm relations  “ a source of pride for both countries”. Chambers also applauded Morocco’s return to the African Union.

He further stressed the strong bilateral relations that bind the two countries, adding that “Liberia never forgets its friends who have supported it in difficult times, including the kingdom of Morocco, which provides constant and concrete support in various areas.”

As for El Malki, he reiterated Morocco’s commitment to strengthening cooperation and exchange between the two countries. He underlined Morocco’s pioneering role throughout the continent, as well as the kingdom’s genuine desire to cooperate and coordinate with its “African brothers” on important policy concerns.

As a token of the kingdom’s commitment to coordination between the two countries, El Malki invited Chambers fora future working visit in Morocco.