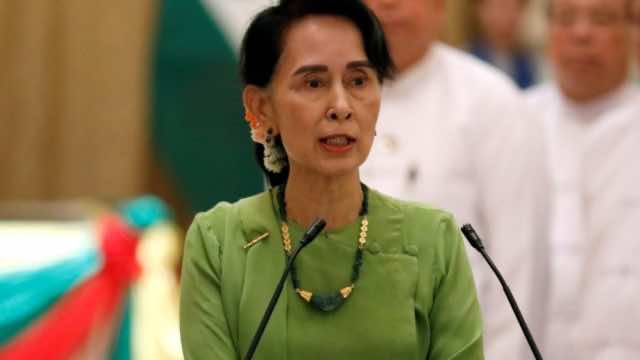 Rabat – A petrol bomb was thrown yesterday at the symbolic Lakeside Yangon compound of the State Counsellor of Myanmar and Nobel Laureate, Aung San Suu Kyi, where she was held under house arrest for 15 years by the former Burmese military government (Junta) – this sacrifice urged her National League for Democracy (NLD) party to a majority win in 2015, following 5 years since her liberation.

The report was confirmed by Director General of the State Counsellor’s Office, Zaw Htay, however, he provided no insight into the motive behind the attack or the condition of Myanmar’s de facto leader. The narrative gaps were later filled by Kyi Toe, official from the NLD, who confirmed Daw Aung San Suu Kyi’s absence from her residence at the time of the attack and described the minimality of damages induced:

“Nothing was destroyed or burned… Our respected security forces are continuing their work so they can arrest the culprit,” said Kyi Toe.

Zaw Htay followed up, posting a description of the culprit on social media, who was captured on camera fleeing the scene – A 5-foot 5-inch brown man, about 40 years of age, with short black hair, wearing a blue longyi and pink t-shirt at the time of the crime.

Despite the domestic adoration for Ms Suu Kyi for her critical role in the democratizing of Burma, she has faced criticism on an international scale for her shortcomings in addressing the alleged human rights violations committed by her nations military amidst their response to the violent insurgence in Northern Rakhine, by Rohingya extremists.

Aung San Suu Kyi claimed in September of last year that the situation is being misinterpreted through a “huge iceberg of misinformation”.

“We make sure that all the people in our country are entitled to protection of their rights as well as, the right to, not just political but social and humanitarian defence,” she reportedly said to Recep Tayyip Erdogan, the Turkish president.

The acts of brutality began in October of 2016 and have led to the mass fleeing of almost 700,000 to the Bangladesh border, a majority of the originally 1.1 million Rohingya civilians living in Northern Rakhine. The refugees brought with them testimonies of rape, murder and arson, qualifying Myanmar’s military and government for global condemnation of alleged ethnic cleansing, to which they actively deny.

The heroine of democracy’s silence has warranted beratement of her own, most recently reprimanded by US diplomat Bill Richardson for lacking “moral leadership”, refusing to attend her committee intended to “ease communal tensions in Rakhine” – saying they will most likely “whitewash” the genesis of the issue at hand.

The State Counsellor is currently in Naypyidaw in anticipation of the two-year anniversary of the election of the National League for Democracy, and has not yet commented on the villa bombing.