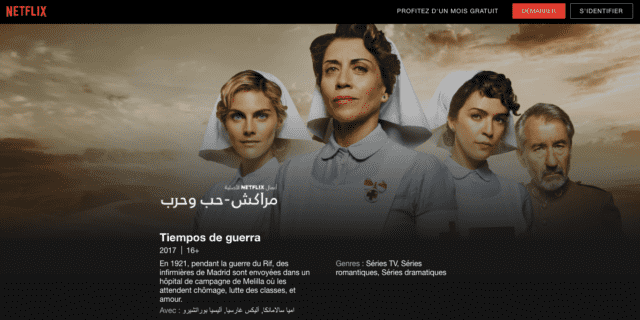 Rabat – Spanish series, “Morocco: Love in Times of War,” will air on Netflix, following enormous success on Spanish TV,  starting February 16. The events revolve around three Spanish nurses with no experience who volunteer in the city of Melilla during the Rif War of the 1920s.

“In 1921, during the Rif War, nurses from Madrid are sent to a hospital in Melilla where they are met by unemployment, class struggle, and love.”

The drama follows Julia Ballester, played by actress Amaia Salamanca, who volunteered in the hope of finding her brother and fiancée that have been taken as prisoners of war. Julia; however, gets distracted from her mission after meeting Army Doctor Fidel Calderón, portrayed by Álex García, who has a fiancé of his own. The series also introduces the viewers to Julia’s fellow nurses, Pilar, Magdalena, and Veronica who are also entangled in relationship drama.

The Rif War, also known as the War of Melilla, was an armed conflict between the Spanish colonial forces, later supported by the French forces, and the Amazigh people of the mountainous region of northern Morocco known as Rif lasting from 1921 to 1926. The leader of the war was  Mohammed Ben AbdelKrim El Khattabi, who surrendered to French and Spanish forces in May 1926.