Rabat - Anger is mounting over the arrival of five Moroccan journalists to Israel on Monday, triggering yet another fueled debate in the Moroccan public sphere around the prospects of Moroccan normalization of Israel’s cultural and political action. 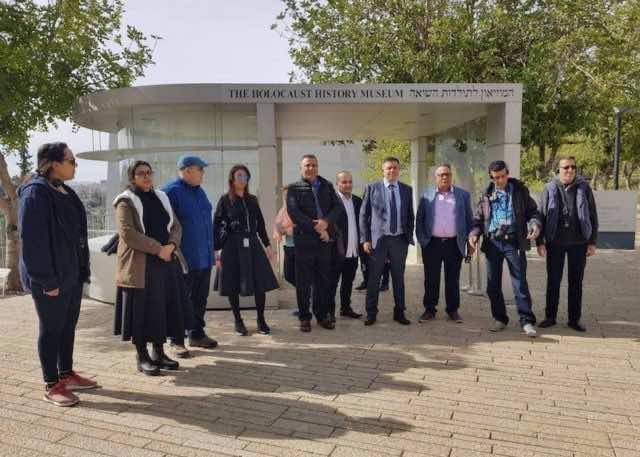 Rabat – Anger is mounting over the arrival of five Moroccan journalists to Israel on Monday, triggering yet another fueled debate in the Moroccan public sphere around the prospects of Moroccan normalization of Israel’s cultural and political action.

The Moroccan delegation, along with four other journalists from Lebanon, Iraq, Syria, and Yemen, traveled to Israel on Monday for a six-day visit “to help open a window on #Israel and its people for readers across the #Arab world,” Director General of the Israeli Ministry of Foreign Affairs Yuval Rotem said.

According to the official social media page of the Israeli Ministry of Foreign Affairs, this visit seeks to give the delegation “a closer look at Israel, its policy regarding the Israeli-Palestinian conflict, and coexistence among the various micro-components through meetings with leaders from various political circles in government departments and the Knesset.”

The Middle East Eye claims that, far from being as innocent as the Foreign Ministry of Israel claims, the Israeli state has long since waged war on boycott movements, in a systematic move to promote and normalize its culture and controversial position in the international scene.

This type of visit often draws outrage from the Moroccan public, who accuse Arab visitors to Israel as polishing Israel’s image in Morocco.

It seems that Israel is dabbling in unanticipated policy that could lead the country to soften its relations with Arab States.Morocco seems to be an appealing target for this campaign.

Israel has now hosted four Moroccan delegations. It has it reopened flights with Morocco after a 13-year halt, during which air traffic between the two countries was completely blocked and economic exchanges between the two states seem to prosper.

But this does not necessarily imply that Morocco is taking up a “come what may” attitude.

“The regional situation has considerably changed and it would be ‘foolish’ to view the matter through the lens of Arab patriotism,” said Amazigh activist Mounir Kejji, who is also a member an organization dedicated to fighting anti-Semitism and strengthening cultural ties with Israel.

“Morocco knows what is best for its interests and right now, the Jewish lobby controls considerable power in the world. Morocco will not simply turn a blind eye on where the profit lies and fight for a cause at the cost of its own advancement.”

“Arab attitudes against the Israeli occupation are based on humanitarian and human rights principles, the most important of which are respect for human rights, freedom of expression and opinion. These are the principles advocated by most journalists throughout the world, which are constantly violated by the State of Israel.”

The syndicate affirms that the visit falls in the political propaganda of Israel, and has nothing to do with the practice of journalism.

But journalist and activist against anti-Semitism, racism and discrimination, Boubker Outaadit says that the issue cannot afford to be mixed with Arab populism.

“Journalists are free to go to whatever country they want. The constitution guarantees us this right. It has nothing to do with one’s own beliefs or perceptions of the Israeli-Palestinian conflict.”

Nevertheless, the information minister of the Palestinian Authority holds firm that “siding with Israel and its terrorism marks a departure from the Arab rank and the decisions of the Council of Arab Ministers of Information.”

The visit “constitutes a departure from the official and popular Arab position that considers Israel a state of occupation, racism, ethnic cleansing, and extremism,” said the ministry.

Its counterpart in Morocco considers the issue tightly linked to the stance of the ordinary Moroccan citizen.

Indeed, a substantial proportion of the Moroccan population, political parties and NGOs firmly support the Palestine cause. The King serves as the president of al-Quds Committee and civil society in Rabat and Casablanca are known for organizing the largest street demonstrations in the Arab World in the support of the Palestinian cause. The latest of these demonstrations occurred in the wake of Donald Trump’s recognition of Jerusalem; over 50,000 Moroccans staged a mass demonstration in Rabat, blocking roads and waving Palestinian flags.

“The ministry condemns actions of the five Moroccan who traveled to Israel. They have gone against the popular opinion in regard of the Palestinian-Israeli conflict,” Minister of Culture and Communication Mohamed Laaraj said.

The Palestinian Authority called on the Arab Journalists Union to take “punitive and deterring measures” against the journalists and their outlets.

And Laaraj indicated that his department is working on setting up policies that would prevent Moroccan journalists from visiting  Israel. For Kejji, this would be synonymous with creating a “dictatorship.”

“If the government wants to prevent people from flying to Israel, then why not put a travel ban on Afghanistan or Iran  […] countries that fund and support terrorist groups,” Kejji said.

Nevertheless, public controversies around the underlying reality of the Israeli political and social order have existed for years in Morocco. With every new confrontation with Israel, the debate surfaces and spirals into a war of words between the supporters of the two parties.