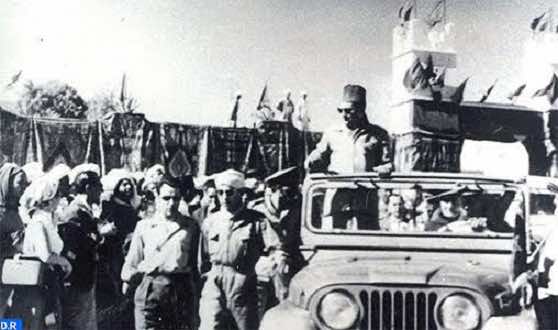 The late monarch delivered a speech in the valley of the Draa river at the marketplace of the M’hamid oasis, stating that he would do anything in his power to unify families and regain the Western Sahara.

His speech came only a few years after his return from exile on November 16, 1955. A year later (1956), Morocco gained its independence.

The king delivered his speech in the presence of representatives from the Moroccan Sahara tribes.

During the same year, Morocco and Spain signed the Treaty of Angra de Cintra, allowing Morocco to recover part of its southern territories, including Tarfaya and Tan-Tan, after resistance operations conducted by the Moroccan Army of Liberation against the Spanish colonizers.

“We solemnly proclaim that we will continue our efforts to reclaim our Sahara, in accordance with our historical rights and the wishes of the inhabitants,” said the late King in M’hamid El Ghizlane.

Through his speech, the King reaffirmed Morocco’s sovereignty over the Sahara and the country’s willingness to defend its territorial integrity.

February 25 is also an opportunity to recall the achievements and sacrifices made by the National Liberation Army and populations of the Moroccan southern provinces, who reaffirmed their loyalty to defend their territory from the colonizers, especially during the battle of Bougafer or Saghro in 1933 against the French.

Mohammed V’s speech was echoed by his son, late King Hassan II, in April 1981 when he underlined the political context his father’s visit and the profound meanings of the national event.

“We remember our father’s visit with pride because it is from here that he called for the return of the Moroccan territories to achieve national unity and we remember the visit, because it was a call that had a great echo and was a lesson in politics and patience from which we now reap the benefits .”

Until this moment, Morocco is still fighting to defend its territorial integrity and is working to prove to the international community that its sovereignty over the Sahara is not subject to compromise or negotiations.