Rabat - Qatar reaffirmed its support of Morocco’s sovereignty over the Sahara during the 7th session of the High Joint Bilateral Cooperation Commission on Monday. 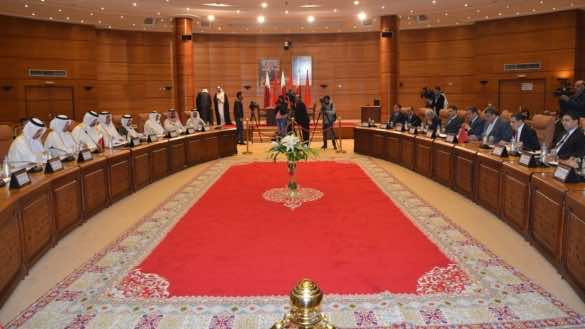 Rabat – Qatar reaffirmed its support of Morocco’s sovereignty over the Sahara during the 7th session of the High Joint Bilateral Cooperation Commission on Monday.

In a joint statement, printed in Moroccan news sources, Qatar noted that “the settlement of the regional conflict over the Sahara must be done within the framework of the Kingdom of Morocco and in respect of its territorial and national integrity.”

The statement also lauded King Mohammed VI’s leadership in the preservation of peace and his support for sustainable development and stability in Africa.

The Qatari official and the accompanying delegation were received by El Othmani on Sunday at Rabat International airport.

During the meeting, twelve cooperation agreements were signed between Morocco and Qatar.  These agreements cover political, economic, and cultural cooperation. The two countries also concluded five memoranda of understanding for improved cooperation in the fields of agriculture and housing and the creation of a joint ministerial trade committee. The memoranda also strengthened cooperation in the fight against money laundering, the financing of terrorism, and the exchange of financial information.

Additionally, the two countries initiated a partnership project on human resources training in the aviation sector.

King Mohammed VI held dinner in honor of Qatar’s prime minister after his arrival in Rabat on Sunday evening. The dinner took place in the presence of Speaker of the House of Advisors Hakim Benchamach; the King’s advisors, Taieb Fassi Fihri, Omar Kabbaj, Yassir Zenagui and Abdellatif Menouni; the Qatari official delegation; and other Moroccan officials.