Rabat – In partnership with Mohammed V University, London-based magazine Times Higher Education (THE) will organize its fourth Emerging Economies Summit from May 8-10.

The editorial director of global rankings, Phil Baty, announced that, “after successful summits in Moscow, Delhi and Johannesburg, [he was] delighted to be taking this event to North Africa.

“This will be the first event in THE’s world summit series to be held in Morocco, and we’re looking forward to sharing some of our new data-driven insights, addressing some big challenges facing universities in the emerging economies. But above all, we will champion  the rise of a new generation of universities and celebrate the role that they play in nation-building,” he added.

Following the theme of “Empowering the Next Generation Universities,” this event will explore some of the most pressing questions that face  universities in Rabat. ; Questions will include the role of technology in accelerating institutional development, exploring links between governments and private investors in designing the new universities, and curricular reforms which will suit the industry’s needs.

This edition of the event will feature top leaders from research universities around the globe, and from some of the world’s  fastest growing states. Guests will include Alan Ruby, Senior Scholar at the University of Pennsylvania, Dong-sung Cho, President of Incheon National UNiversity, Hassan Al-Derham, President at Qatar University, Milla Soko, Director of the Graduate School of Business at the University of Cape Town, and Mamdouh Shoukri, President Emeritus at York University.

President of Al Akhawayn University, Driss Ouaouicha, will also participate in a panel discussion on universities’ role in addressing inequality of opportunity Joining him will be Sam Fongwa, researcher at the Centre for Higher Education and Development at the University of the Free State, Huey-Jen Jenny Su, President of National Cheng Kung University, and Ahmed S. Yamani, Rector of Prince Sultan University.

The Emerging Economies Summit will also host the global launch of THE Emerging Economies University Rankings 2018, and will include a special session with THE’s data scientists. They will provide exclusive insight into the most comprehensive measures of research universities’ performances across the Americas, Europe, Africa, and Asia.

The Emerging Economies Summit conference  was founded in 2014 with the Russian Academic Excellence Project, which is currently aiming to see five Russian universities enter the top 100 in global university rankings by 2020. 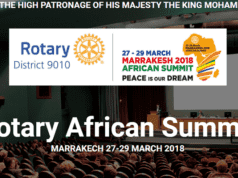 Marrakesh to host the 1st African Summit of Rotary International