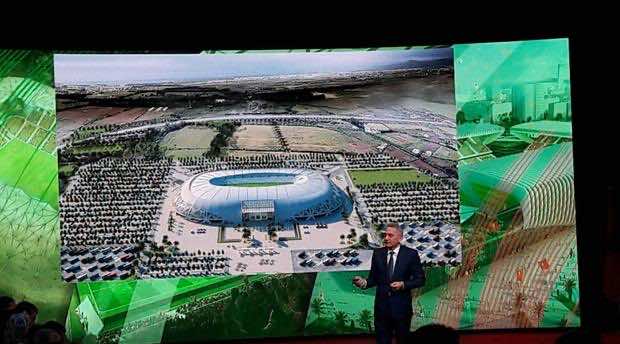 FIFA confirmed having received the bid books, which are available on its official website with their respective executive summaries.

Through its executive summary, Morocco’s bid book underscores the importance of football in the North African country. The briefing describes Morocco as a land of football, where the games’ passion “run through every vein” in Morocco.

The summary added that the passion for football in Morocco is shared by 84 percent of the Moroccan population. This aspect, according to the exclusive document, has “enabled the Royal Moroccan Football Federation (FRMF) to rally the whole nation in support of its fifth FIFA World Cup Bid.”

Football is not exclusively for men.  According to a survey carried out by IFOP and mentioned by the summary document, 75 percent of Moroccan women follow the game.

The bid book outlines Morocco’s determination to host the massive tournament. Explaining its readiness for the event, the file says that the country will offer football fans and footballers with an unprecedented experience.

Introducing Morocco to the world, the summary describes Morocco as a “land of peace and stability.”  The file also underscored the nation’s “extraordinary diversity and tolerance, open to the world and ready to welcome the world in all its colours.”

The bid showcases Morocco’s key assets, including its ideal proximity to Europe and Africa.

“Morocco offers the ideal stage on which to pursue this ambition. It stands at the crossroads of the world, where Africa meets Europe and where East meets West, at the heart of millions of fans, who will benefit from a truly accessible and affordable tournament.”

The document also pointed out the timezone and location, which will guarantee “commercial success.”

The aforementioned IFOP survey included in the bid book,  emphasizes that 93 percent of Moroccan citizens believe that hosting the World Cup will create more employment benefits and economic development.

According to the executive summary, the country’s hosting strategy will also be beneficial for other African nations, hoping to win the tournament’s host bid in the future.

Subsequently, the country’s bid reminded FIFA that this file represents all of Africa, “a catalyst for pride, progress and cohesion throughout a continent where football forms part of the fabric of people’s daily lives.”

For Morocco, the bid represents an exclusive time of “Moroccan engagement in Africa,” marking Morocco’s return to the African Union in 2017.

Morocco officially submitted its bid book to FIFA on March 15. The application has received the support of many countries from different corners of the world, including Russia, Serbia, Luxembourg, Botswana, Qatar, Algeria, Tunisia, and France.