Rabat - Beginning today, Morocco will hold a seat on the African Union's Peace and Security Council (PSC) for a two-year period. The North African country plans to actively contribute to the promotion of peace and stability on the continent.

Rabat – Beginning today, Morocco will hold a seat on the African Union’s Peace and Security Council (PSC) for a two-year period. The North African country plans to actively contribute to the promotion of peace and stability on the continent.

Morocco was selected to join the PSC during the 32nd ordinary session of the AU executive council held in Addis-Ababa in January.

Morocco’s Ministry of Foreign Affairs said in a statement on Saturday that Morocco’s election to the PSC represents an affirmation of the kingdom’s credibility in diplomatic endeavors and the high esteem it has earned for its strategy of engagement within Africa.

The statement reported by Maghreb Arab Press added that this election to the PSC also acknowledges the leadership role that Morocco has played in several initiatives since 1960 to advance Africa’s stability and development.

The same source added that the North African country is establishing its “mandate within the PSC” with the view of promoting peace and security on the continent, particularly given the security challenges that “require joint and concerted action as well as an unwavering commitment” by African nations to help protect genuine security and stability.

According to the Moroccan ministry, stability on the continent will only be achieved through “political stability, respect for the sovereignty and territorial integrity of States, as well as the consolidation of the rule of law in Africa.”

Africa’s security agenda should also prioritize the settlement of regional conflicts and crises which “constitute a real threat to peace and security in Africa,” according to the statement.

During its two-year term, Morocco will give special attention to issues related to terrorism prevention and the fight against violent extremism, as well as post-conflict reconstruction. Morocco’s goal is to federate “collective efforts of the Council’s member States” and to seek immediate solutions to the issues that hinder Africa’s sustainable development.

Morocco’s strategy will also prioritize socio-economic development and South-South cooperation, which form a bedrock principle “and a condition sin qua non for peace, stability, and prosperity in Africa.”

Other initiatives that Morocco will pursue while a member of the PSC include combating human trafficking, food security and environmental security.

Morocco to Lead AU’s Peace and Security Council in September 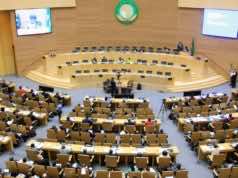 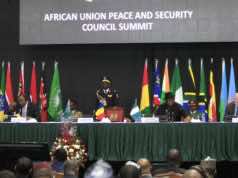