Rabat – Hervé Renard appears in the latest edition of Hola! Maroc as you rarely seen him. In contrast to his typical reticence when it comes to his private life, the French coach has opened up to the magazine to discuss his values, coaching, and love for the African continent.

Renard is featured on the cover of the Moroccan magazine with the woman who shares his life, Vivan Dièye (the widow of Bruno Metsu, former coach of Senegal’s national team).

“In Africa I feel free. This continent brings me exceptional recognition, I don’t think I can live anywhere else,” he said to Hola!

The one to whom the Moroccan people owe their qualification to the 2018 World Cup received the people’s magazine in his residence in Senegal.

During this interview, Renard discussed his debut as a player and as a coach, shared his life values, and expressed his expectations for the Moroccan team.

“From an early age, football has punctuated my life. Much later for eight years, parallel to the end of my career as a player and the beginning of that as a coach, I served as the head of company. It’s an experience that taught me a lot,” he said.

“My education taught me that you can’t get anything without work. My mom always told me this life lesson. The value of men, respect, and trust are the most important adjectives to me. It does not matter where you came from or where you grew up. Help others, without interest, without expecting anything in return.”

Despite rumors that he’s leaving the Moroccan team, Renard links his future in Morocco to the results that the national team will achieve in Russia next June. He believes that the Lions’ team “needs to improve its ball possession, as well as its ball recuperation techniques in order to compete with other teams” at this summer’s World Cup in Russia. 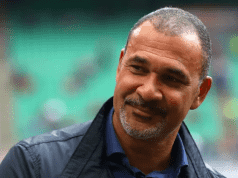