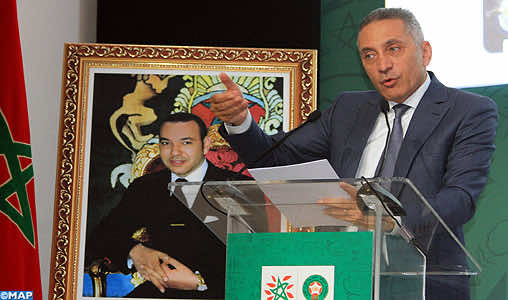 During a press presentation held on Friday, Elalamy said that the members of the Task Force “expressed their admiration for the quality of Morocco’s bid to host the 2026 World Cup.

The Task Force arrived in Morocco on April 16 to evaluate Morocco’s assets and capacity to host the World Cup.

Elalamy said that the FIFA delegation “felt the passion of the whole population” for the tournament, which “clearly highlights the fact that Morocco as a whole is a candidate.”

The Moroccan official added that the Task Force praised Moroccan emphasizing  that Morocco “is a country in full development, in full construction, with a clear vision, where the World Cup is a tool for the accelerating development projects at all levels.”

He added that the delegation expressed its satisfaction over Morocco’s concept of modular stadiums introduced by the Moroccan bid .

The chairman of the bid committee said that FIFA members were “open to discussion and enthusiastic” during their talks with the Moroccan delegation. He further said that the FIFA Task Force made “some remarks about the capacity to deliver the projects and the quality of the stadiums, especially hospitality spaces and VIP.”

Elalamy concluded that the members of the Task Force have expressed their total “willingness to support the efforts” of the Moroccan and the United bids.