Rabat - “Answering a couple of questions that were raised by various people in this room on Western Sahara: First, I can say that neither Bir Lahlou nor Tifariti fall within the buffer strip,” said UN Secretary General’s spokesperson Stéphane Dujarric during his daily press briefing on April 19, at the UN headquarters.

Rabat – “Answering a couple of questions that were raised by various people in this room on Western Sahara: First, I can say that neither Bir Lahlou nor Tifariti fall within the buffer strip,” said UN Secretary General’s spokesperson Stéphane Dujarric during his daily press briefing on April 19, at the UN headquarters.

The UN official hastened to add that the body’s meeting with the separatist front will continue to be held in Rabouni, not in Bir Lahlou, as Polisario had requested.

“Second, regarding meetings with Frente Polisario: since the arrival, in late December 2017, of the Special Representative of the Secretary-General, Colin Stewart, MINURSO (United Nations Mission for the Referendum in Western Sahara) has preferred to adhere with the longstanding practice of holding such meetings in Rabouni, Algeria,” the spokesperson said, reaffirming the international body’s commitment to respecting and upholding the spirit of the military agreement.

As the move comes at a time when the UN has admitted to Polisario’s military activities in the region—Mr. Dujarric affirmed that MINURSO military observers were stopped by armed Polisario members in the vicinity of Tifariti during same briefing —questions are being raised about the separatist front’s respect for and or commitment to the military agreement.

Why else would Polisario stop a MINURSO patrol unit and fire warning shots? Or request that meetings be held in Tifariti? Is it a calculated strategy designed to distort the terms of the cease-fire agreement? These are some of the questions that Moroccan and international pundits have been raising, especially given recent reports that the Polisario Front has moved to erect its de facto capital city in Tirafiti.

If history is any guide, one commentator suggested, it seems the Polisario is now violating the terms of the agreement, having been unsuccessful in its attempts to provoke Morocco into an armed response–a move that would have considerably damaged the kingdom’s image in the eyes of the international community.

The agreement states: “The Military Agreement No. 1, which regulates the ceasefire between the Frente POLISARIO and Morocco, establishes the Moroccan military wall as a line of separation between the Sahrawi and Moroccan armies pending the holding of the self-determination referendum and the determination of the final status of the Territory. It also establishes a 5 km wide ‘buffer zone’ to the east and along the 2700 km Moroccan military wall. 2. The agreement further establishes two restricted areas (30 km east and 30 km west of the Moroccan military wall respectively), where firing of weapons and/or military training exercises, redeployment or movement of troops, entry of arms and ammunition and improvements of defense infrastructures are not permitted, and and two areas of limited restriction that encompass the remainder of territory on both sides of Morocco’s defense wall.

It is undeniably true that, as Mr. Dujarric said in his April 19 noon briefing, Bir Lahlou and Tifariti are not in the buffer strip. Yet, as clearly stipulated in the agreement, until the pending referendum is held, any military action in either area constitutes a glaring violation of the cease-fire.

To be sure, by creating a military and administrative bastion in areas that it purports to have “liberated,” the separatist front seeks to take advantage of the cease-fire agreement, changing the status quo which that very agreement is supposed to maintain.

In his Western Sahara report earlier this month, the UN Secretary General Antonio Guterres demanded that MINURSO’s mandate be extended to April 2019. Shortly after, Morocco notified the UN Security Council of the separatist front’s military movements in Marhbas and Guerguerat, both of which are in the buffer strip.

King Mohammed VI subsequently informed Algeria that Morocco would not stay standing by as the separatist continued escalating tensions and provoking Moroccan military personnel in the southern province: Morocco is ready to resort to using its military might to quell the front’s provocations, the king said.

And yet, despite the king’s warnings, Morocco is choosing to prioritize a political solution—through diplomacy and negotiations. To be sure, the kingdom expects other stakeholders to play their part and keep their end of the bargain. Furthermore, the UN, as the primary guarantor of the negotiation process, should show more resolve when it comes to respecting the terms of its mission.

For if Morocco, too, decides to pursue a less diplomatic response, to violate or respect the agreement as it sees fit, tensions may reach untenable proportions—ones beyond the peacekeeping capacities of MINURSO or the UN. 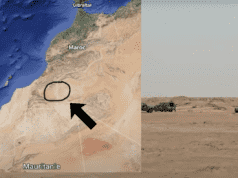