Rabat- During the celebration of the 13th annual International Agriculture Salon in Morocco (SIAM), Morocco’s Minister of Agriculture, Aziz Akhannouch, publicly announced his disregard for the online campaign in protest of the rise in commodity prices.

On Thursday, April 25, Akhannouch–who is also the owner of the parent company of Afriquia gasoline–publicly announced that he believes agricultural production will not be affected by a virtual campaign.

“Moroccans drink milk morning and afternoon…this is not a game,” he said. “They are aware of the fact that when they drink one cup of milk, they help a good number of dairy farmers who live off it.”

Akhannouch added that the internet campaign cannot stop 470,000 employees in the dairy sector, noting that citizens should be thankful for the fact that there are no milk shortages and the product is available throughout the year, while also hailing the efforts of cattle breeders in the sector.

The dairy, gasoline, and bottled water boycott launched on April 20, on Twitter and Facebook. Protesters have created pictures, videos, memes, and pages, to raise awareness of the exorbitant prices of the Centrale Laitière, Afriquia (subsidiary of the Akwa Group), Sidi Ali companies, compared to others that sell the same products, three weeks before the beginning of Ramadan.

Hearkening back to Head of Government Saad Eddine El Othmani’s move to dispel public doubts surrounding the safety question of drinking tap water, Akhannouch and other event participants stood side by side and raised their glasses of milk, implying their support for the product. 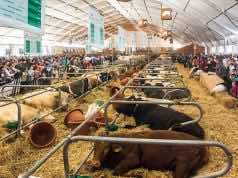