Rabat - Sofiane Boufal is Southampton’s new persona non-grata. The 24-year-old football player has been sidelined by the Southampton Premier League, due to an altercation with his coach, Mark Hughes.

Rabat – Sofiane Boufal is Southampton’s new persona non-grata. The 24-year-old football player has been sidelined by the Southampton Premier League, due to an altercation with his coach, Mark Hughes.

In a press conference held on Thursday, Southampton coach Mark Hughes explained that Boufal had made a “mistake.”

“He probably needs to be confident again” said Hughes, adding that Boufal would not be playing against Bournemouth on Saturday.

According to the Guardian, the Moroccan player, who was on the bench for the team’s loss to Chelsea, irritated his coach by refusing to warm up. The Atlas Lion must now train with the under-23 years.

Boufal has had his ups and downs with Southampton since he arrived in the summer of 2016, after trading from LOSC for nearly EUR 19 million.

Boufal chose to stay with the Saints and managed to win the trust of his former coach, Mauricio Pellegrino, who decided to grant him more playing time.

Born in Paris, Boufal came through the youth system at Angers and made his debut in the French second division at the age of 18. The following season, he became a first-team regular.

Lille paid EUR 4 million for the Moroccan player in January 2015, and he made quick impact with his speed and dribbling.

Boufal first attracted the attention of top European clubs in 2016, when Southampton, Tottenham Hotspur, Paris Saint-Germain, and Inter Milan are all said to have expressed interest.

Boufal made his debut with the national team on March 26, 2016, starting in a 1-0 African Cup of Nations qualification victory against Cape Verde. 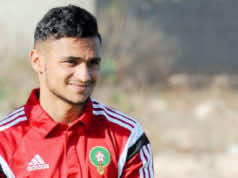