Rabat- The 1st Summit of the Climate Commission in Brazzaville proved to be fruitful for Morocco, as the North African country signed 14 bilateral agreements with Congo covering several different fields, including fisheries, health and education. 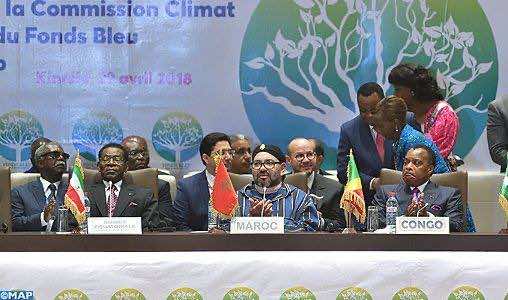 Rabat- The 1st Summit of the Climate Commission in Brazzaville proved to be fruitful for Morocco, as the North African country signed 14 bilateral agreements with Congo covering several different fields, including fisheries, health and education.

On Monday, King Mohammed VI and his Congolese counterpart Denis Sassou Nguesso chaired the signing ceremony of several bilateral agreements at the People’s Palace in Brazzaville.

The agreements aimed to strengthen cooperation between Rabat and Brazzaville and reinforce Morocco’s strategic vision towards African countries and friends according to Maghreb Arab Press (MAP).

The first agreement signed between the two countries covered reciprocal promotion and the preservation of investments. The agreement. signed between Mohamed Boussaid, Minister of Economy and Finance,  and Jean-Claude Gakosso, Minister of Foreign Affairs, Cooperation, and Congolese Abroad, aims to strengthen economic cooperation by creating favorable conditions for investment aimed at business operators in Congo and Morocco.

The second agreement, signed by the same officials, is a convention against double taxation and the prevention of tax evasion with respect to taxes on revenue. This convention seeks to strengthen relations between the two countries and aims to establish the legal bases against taxes.

The third agreement concerns the establishment of a landing spot in the Republic of Congo. Aziz Akhannouch, Minister of Agriculture, Maritime Fisheries, Rural Developmen,t and Waters and Forests, and Gakosso signed the agreement.

Akhannouch and Gakosso also signed the fourth agreement, which covers cooperation in the field of sea fishing and marine aquaculture.  The agreement seeks to lay down the principles for the implementation of cooperation in the fields of sea fishing, aquaculture, and related activities, including maritime training, fisheries research, fisheries management, and the promotion of small-scale fisheries.

The sixth agreement is a protocol in the field of primary, secondary, and literacy education. Morocco’s Minister of Education Said Amzazi and Gakosso signed the agreement.

The seventh deal, a framework cooperation agreement in the field of logistics, aims to establish a mutually beneficial approach for cooperation in the development of logistics sector in both countries. Abdelkader Amara, Minister of Equipment, Transportation, Logistics, and Water, and Gakosso signed the agreement.

The eighth agreement was a memorandum of understanding for training in the health sector, signed by Anas Doukkali, Minister of Health and Gakasso. The MoU aims to support the Ministry of Health and Population of Congo in terms of continuing the education of Congolese health experts and basic training for paramedics.

The ninth agreement on energy aims to develop cooperation between the two countries in the fields of electricity and technical assistance, in order to establish renewable energy projects, and the exchange of experiences in the field of renewable energy. This agreement was concluded between by Aziz Rebbah, Minister of Energy, Mines, and Sustainable Development, and Gakosso.

The tenth agreement concerns cooperation in the field of tourism and aims to promote cooperation between the two countries. The agreement was signed by Mohamed Sajid, Minister of Tourism, Air Transport, Crafts, and Social Economy, and Gakosso.

This agreement will  strengthen the institutional framework and the , methods and tools for the development of renewable energy energies. This agreement was signed by Mustapha Bakkoury, President of MASEN, and Gakosso.

The twelfth document is a MoU signed  between the National Office for Hydrocarbons and Mines (ONHYM) and the Center for Geological and Mining Research (CRGM) of the Republic of Congo on Scientific and Technical Cooperation.

The agreement aims at defining the conditions of a scientific and technical partnership between ONHYM and CRGM, with a view to strengthening the exchange of experience and technical skills in the fields of training, exchanges of expertise, in addition to the possible participation of ONHYM in mining projects in Congo. The agreement was signed by Amina Benkhadra, Executive Director of ONHYM, and Hilaire Elenga, Managing Director of CRGM.

The thirteenth agreement,signed between the Office of Vocational Training and Promotion of Work (OFPPT), the Moroccan Agency for International Cooperation, and the Ministry of Technical and Vocational Education of the Republic of Congo concerns the establishment of a mission to improve Congo’s vocational training system.

King Mohammed VI attended the 1st Summit of Heads of State and Government of the Climate Commission of the Congo Basin and the Blue Fund for the Congo Basin on Sunday. At the summit, he delivered a speech on the challenges facing Africa, including the climate change impacts. 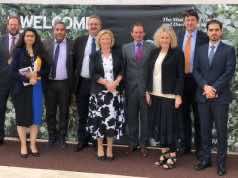