Rabat - Real Madrid has secured a pass to the Champions League final for the third consecutive time over Bayern Munich, after a 2-2 draw match with the visitors losing 4-3 on aggregate. 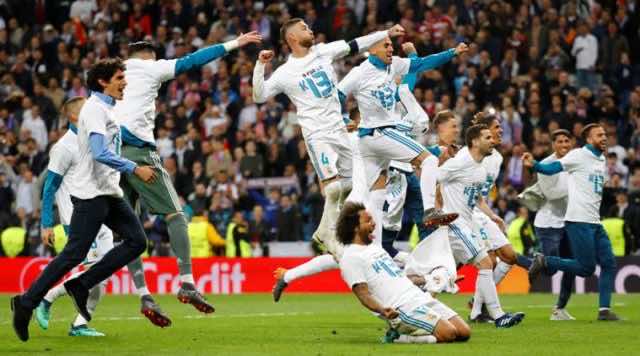 Rabat – Real Madrid has secured a pass to the Champions League final for the third consecutive time over Bayern Munich, after a 2-2 draw match with the visitors losing 4-3 on aggregate.

After the referee’s whistle, the Bavarians scored an early goal in the second minute of the game, thanks to Muller’s cross into the box, netted by Kimmich.

Eight minutes later, Real Madrid made a quick comeback with a surprisingly, simple header by Benzema, crossed by Marcelo from the left.

Despite Madrid’s burst of strength, Bayern continued to dominate for the remainder half.

Just seconds before the end of the first halftime, a cross from Kimmich struck the left arm of Marcelo inside the penalty zone. However, the referee waved away Bayern’s claim to a penalty, a fact that Marcelo later admitted.

He told reporters, “It’s a hand–it hits me in the hand, and it’s a penalty. If I say it does not hit me, I’m lying, but football is like that.

“I do not talk about the referees, but it is clear that sometimes it is wrong in our favor and other times against. No matter what happens, you have to play football.”

Despite the Germans’ effort to shake their rivals’ net, Benzema exploited the goalkeeper’s fault just a few seconds after the second half-time to score the second goal for Real Madrid.

With determination and team spirit, the former Real Madrid player, James Rodriguez, evened out the score, followed up an initial kick to net his own rebound, 62 minutes into play.

The German club was determined to pull out a win, but Zidane have managed to keep the score in Real Madrid’s favor.

This match was marked by the Benzema comeback, who apparently went quiet this season, but Zidane, Ronaldo, and the rest of the team did not stop believing in his skills, as Marcelo told the press: “It is clear that he had to arrive, Karim is a great player and he does not need to score goals every day to show what he is worth.”

In April, Ronaldo agreed, “As long as I’m with Real Madrid, you [Benzema] will have your place secured.”

Despite Real Madrid President Florentino Perez’s anger over keeping Benzema as an attacker, Ronaldo and Zidane have reminded Perez of Benzema’s ability to achieve his goals, in addition to his importance among the players.

Zinedine Zidane has repeatedly proven that he is good at what he does; he was right in sticking with his current team and working through obstacles to achieve better results.

Will Zidane leave his mark on history and lead Real Madrid to its 12th Champions League title, the third in a row?