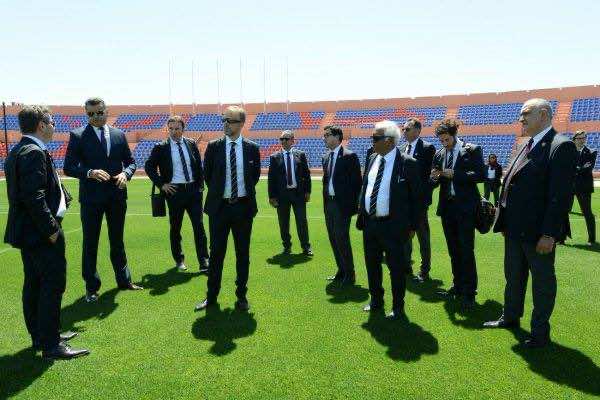 FIFA has dismissed Morocco’s request to exclude four US-governed territories from the vote, scheduled for June 13 in Moscow.

Morocco and the countries represented in the United 2026 bid  (US-Canada-Mexico) cannot vote. The North African country asserts that US territories American Samoa, Guam, Puerto Rico and the US Virgin Islands should also be excluded from the vote since they are governed by the US.

The Moroccan bid committee addressed a letter to FIFA, asking whether the four territories, considered four separate football nations by FIFA, would be excluded from the vote.

FIFA, however, told the Associated Press that at the time “no member association has notified FIFA about its intention not to perform their duties in connection with the bidding procedure for the hosting of the 2026 FIFA World Cup.”

Morocco urged FIFA to “make sure that FIFA Council members Sandra Fruean, Sunil Gulati and Victor Montagliani,” stay out the room when the 2026 World Cup vote is discussed, “as they are from America Samoa, the US and Canada, respectively.”

It is well known which bid FIFA prefers.

US-based sporting news outlet ESPN said that United 2026 “is thought to be the preferred option of FIFA president Gianni Infantino.” ESPN added that United 2026’s potential profit is “welcomed” by Infantino since he is looking to fund the “development handouts he promised national associations when elected in 2016.”

On March 25, the Royal Football Federation (FRMF) addressed a letter to FIFA regarding  Morocco’s concerns about the fairness and transparency of the procedure.

“To my surprise, the scoring system was finally sent to us on March 14–24 hours before Morocco submitted its file and two days before the deadline for the submission of applications to FIFA,” wrote FRMF president Fouzi Lekjaa.

On April 3, FIFA responded that the aim of the task force is to “determine whether the bids meet the requirements in terms of infrastructure and revenue-cost criteria.”

FIFA’s response did not convince Morocco, which sent a second letter to FIFA.

“We have taken note of your answers, but unfortunately they have not resolved these concerns and we are still convinced that the scoring system does not comply with the requirements of the bid rules,” reads Lekjaa’s second letter.

Lekjaa further said that Morocco was surprised this measure surfaced only hours before Morocco submitted its bid.

CEO of the Moroccan bid committee Hicham El Amrani told BBC Sport earlier this week that the task force  will publish its assessments of their visit on May 29, eleven days before the Moscow vote. The outcome will decide whether Morocco’s bid meets FIFA’s criteria to be a candidate for the vote.