Rabat - In streets around Tangier, people chanted and yelled when local football team Ittihad Tanger (IRT) clinched the Moroccan league title for the first time in the history of the club on Saturday. The team defeated Moghreb Tétouan 2-1, in Tangier. 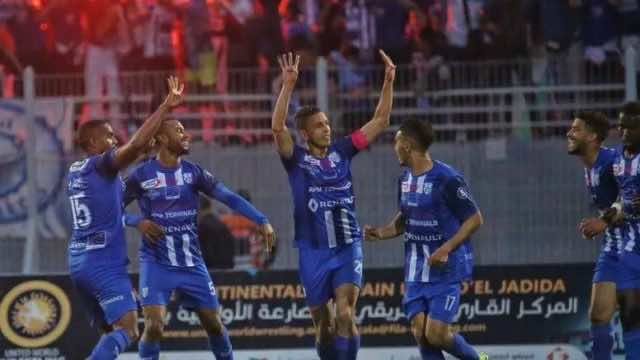 Rabat – In streets around Tangier, people chanted and yelled when local football team Ittihad Tanger (IRT) clinched the Moroccan league title for the first time in the history of the club on Saturday. The team defeated Moghreb Tétouan 2-1, in Tangier.

The first half was not fruitful for the champions, as the team conceded a goal through Moghreb Tetouan’ Senegalese defender Mourtada Fall in the 28th minute.

IRT’s footballers entered the green field with more readiness to secure the win and satisfy their fans’ aspiration. Ahmad Chentouf scored an equalizer for his team in the first three minutes of the second half.

Moghreb Tétouan then gifted Tangier a precious present after the team’s Hamza Moussaoui scored on his own net in the 76th minute.

Tanger is currently leading the league with 52 points.

The win was widely celebrated as the club’s fans stormed Tangier’s streets.

In statements from Maghreb Arab Press (MAP), women, men and children expressed their happiness over the victory.

IRT’s midfielder Ahmed Hamoudan expressed gratitude for the team’s fans, emphasizing that achievement is the “result of the hard work, seriousness, perseverance, and the high spirits of the players.”

The club president, Abdelhamid Aberchane, said that the city and region witnessed an enormous happiness, expressing gratitude for the fans “who accompanied the team in each game, and trusted the performance of the Tangier team despite the opening goal scored by Tetouan.”