Rabat - Sustainable restoration of Morocco’s historic walled medinas (cities) was at the heart of a presentation ceremony, chaired by King Mohammed VI, at the Royal Palace of Rabat. The presentation discussed upgrading programs for four tourism destinations: Casablanca, Fez, Rabat and Marrakech. 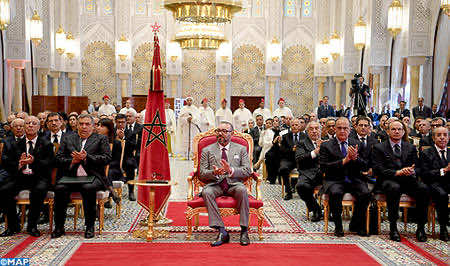 Rabat – Sustainable restoration of Morocco’s historic walled medinas (cities) was at the heart of a presentation ceremony, chaired by King Mohammed VI, at the Royal Palace of Rabat. The presentation discussed upgrading programs for four tourism destinations: Casablanca, Fez, Rabat and Marrakech.

Morocco’s ministers, including Minister of Interior Abdelouafi Laftit, presented the King with the programs and rehabilitation projects to promote four of the most renowned cities in the country, improve living conditions for inhabitants, to preserve architectural heritage, and to honor cultural wealth.

During the ceremony, King Mohammed VI ordered the implementation of a third phase of the projects dedicated to repair buildings falling into ruin. The program is part of the MAD 300 million rehabilitation project of the old city of Casablanca.

Projects in Rabat, “the City of Light, Moroccan Capital of Culture,” will restore ramparts, historic doors, mosques and zaouiyas (religious schools), and traditional hotels, as well as setting up green spaces and fixing other run-down buildings.

Marrakech’s project, “City of Permanent Renewal,” was launched in 2014 and has been renovating the neighborhoods of El Mellah and Ezrayeb of the “Achouhada” Cemetery.  The projects are also developing tourist and spiritual tours of the old medina of Marrakech, Laftit added in his presentation.

The minister added that the MAD 484 million Marrakech renovation program received a donation of MAD 150 million from the Hassan II Fund for Economic and Social Development.

Fez has also benefited from several restoration programs. Laftit said that the programs are focusing on the rehabilitation of 27 historic hubs, including madrasas (schools), hotels, bridges and souks (markets). Fez’s MAD 583 million renovation program received a  MAD 100 million gift from the Hassan II Fund for Economic and Social Development.

During the presentation, the minister said that King Mohammed VI ordered the third phase of the program dedicated to run-down buildings, as part of the rehabilitation program of the old medina of Casablanca, with a budget of MAD 300 million funded by the Hassan II Fund for Economic and Social Development.

Following the presentation, Morocco’s Minister of Tourism and Handicrafts Mohamed Sajid said that the programs aim to reinforce the development dynamic experienced by these old medinas, according to Maghreb Arab Press (MAP).

During the same evening, King Mohammed VI chaired the signing ceremony of three partnerships and agreements for the upgrading programs of Marrakech, Fez, Rabat and a convention for the preparation of the third phase of the program for run-down buildings.