Rabat - Prince Moulay Rachid chaired, on Monday, a luncheon for the 62nd anniversary of the Royal Armed Forces (FAR) at the officers’ mess in Rabat, according to a statement by the FAR's General Staff. 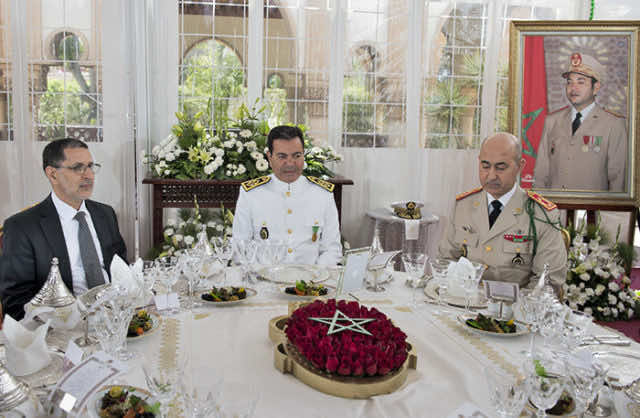 Rabat – Prince Moulay Rachid chaired, on Monday, a luncheon for the 62nd anniversary of the Royal Armed Forces (FAR) at the officers’ mess in Rabat, according to a statement by the FAR’s General Staff.

Upon his arrival at the mess, Moulay Rachid was greeted by the Lieutenant-General, Inspector General of the FAR, and Commander Delegate for Rabat-Salé, before being paid honors by a headquarters’ battalion detachment.

The event was also attended by the President, Speaker of the House of Representatives, Speaker of the House of Advisors, the King’s advisors, government members, President of Supreme Court, the Public Prosecutor, President of the Constitutional Court, high-ranking officers from FAR general staff, foreign military attachés accredited in Rabat, the Director General of National Police, directors of royal offices, the Wali of Rabat-Salé-Kénitra region, and other prominent civil and military figures.

Different FAR garrisons and units held ceremonies to celebrate the FAR’s 62nd anniversary. During these ceremonies, King Mohammed VI, addressed the Order of the Day to officers, non-commissioned officers, and privates.