Rabat - More than 10,000 protesters took to the streets of Casablanca on Sunday in solidarity with the Palestinian people. 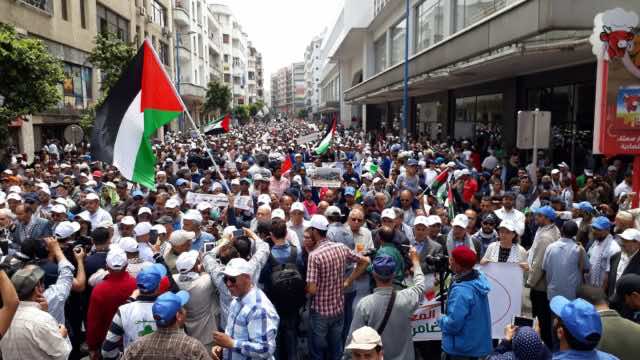 Rabat – More than 10,000 protesters took to the streets of Casablanca on Sunday in solidarity with the Palestinian people.

In the wake of the recent relocation of the American embassy to Jerusalem, the protest demonstrated Moroccans’ solidarity with Palestine. The march also served as a commemoration of the 60 Gazans who were killed during protests throughout the weekend of the move, May 11-14.

The march began at began Place Annasr, crossed Paris Boulevard, and continued on to Boulevard Hassan II and Rachidi, with shouts of “We are going to Jerusalem, millions of martyrs.”

Protesters demanded the preservation and protection of the holy Al-Aqsa Mosque in Jerusalem, and condemned the use of excessive force against unarmed Palestinians.

Morocco’s Justice and Spirituality party planned the protest, in partnership with a four-party coalition.

On May 14, King Mohammed VI rejected the embassy move in a letter to the president of Palestine, Mahmoud Abbas, describing US President Trump’s decision to relocate a “unilateral act contrary to the will expressed continuously by the international community, through Security Council resolutions.”

As the Chairman of the Al-Quds Committee, King Mohammed VI, has emphasized that Morocco will “spare no effort in mobilizing the international community and its forces to triumph over the legitimate rights of the Palestinian people to establish their independent state, with Al-Quds as its capital.”