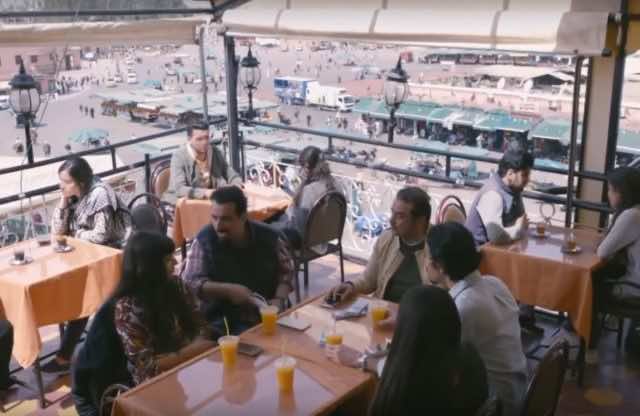 Episode 14 dubbed “ Marrakech, the last trip” feature the journey of three main actors to the city of Marrakech. The men traveled to the Moroccan city, seeking temporary marriage for pleasure with Moroccan women.

The episode shows that the actors arrived in Morocco after they lied to their Saudi wives, claiming that they are going to perform Umrah (a non-mandatory pilgrimage made by Muslims to Mecca) to justify their absence.

The husbands, however, found themselves the victims of their wives, who already knew their plan. The wives plotted a fabricated abduction with the help of a Moroccan woman in order to get the money their husbands wanted to spend on “pleasure marriage” in Morocco.

Moroccans and Saudis alike took to social media to condemn the series for “tarnishing the reputation of Morocco and Moroccan women.”

A Saudi Twitter user wrote: “Imagine a Moroccan series showing Moroccan [men] bringing 20 Saudi women to choose between them. (..) This is what the Shir Chat series is doing.”

“And we are asking why they hate us,” added the same twitter user sarcastically.

A Twitter user from Morocco said “ My Allah (God) punish those people who damage the reputation of the Kingdom of Morocco  and of Moroccan  [women] particularly.”

“The summary of the series: insulting Saudi women and portraying them in a reckless, stupid and naive manner, insulting the reputation of Morocco, a failed representation and no subject, portraying Saudi young people as sheep and liars and disrespecting  [the image] of Umrah,” said another Twitter user.