Rabat - Despite the praise Morocco receives from international observers and partner countries for its anti-terrorism efforts, Morocco’s security authorities think there is more to do to shield the country against transnational terrorism and other criminal networks.

Rabat – Despite the praise Morocco receives from international observers and partner countries for its anti-terrorism efforts, Morocco’s security authorities think there is more to do to shield the country against transnational terrorism and other criminal networks.

Morocco’s success in the fight against terrorism, radicalization, and ideology-associated violence or crime is globally acknowledged. In a recent interview with Moroccan outlet Le Site Info, Abdelhak Khiame, Director of the Central Bureau of Judicial Investigations (BCIJ)—one of Morocco’s most recognizable elite units—gave a comprehensive account of Morocco’s success on the anti-terrorism front.

While lauding the marked improvements that the BCIJ has brought to the “Moroccan security architecture,” the BCIJ director had some reservations regarding the “numerous challenges ahead.”

Khiame is concerned about rehabilitating ISIS returnees and managing Moroccan combatants stranded in combat zones who plan to return to Morocco as soon as circumstances allow them.

Calling the BCIJ a “super police,” Khiame explained that since the inception of the BCIJ in 2015, Morocco’s security system has been “essentially effective,” especially in its ability to identify and thwart security threats. For example, 54 terrorist cells have been dismantled as a result of the BCIJ’s numerous field operations.

Khiame stated that, according to official estimates, the number of Moroccan fighters affiliated with ISIS and other transnational terrorist networks is “only 1,660 fighters.” They are disseminated throughout the MENA region, but are mainly in Iraq, Syria, and Libya. That figure also includes the 200 or so who have already returned to Morocco.

Some Moroccan combatants have been reported to have died, either in combat zones or in “allied strikes.” Others have also been reported to have killed themselves in “suicide missions,” including in several European cities over the years. So, Mr. Khiame concluded, “the situation of Moroccan fighters who have not come back is uncertain.”

When asked about Morocco’s plans for former ISIS fighters now living in Morocco, he said that “preventive measures” have been taken to specifically deal with “the revenants,” the term used to refer to ISIS returnees.

Within the framework of the 2015 anti-terrorist law, there are specific “legal measures” be applied depending on how the individual returned. If, for example, authorities suspect an individual’s desire to join a terrorist organization, the penalty is ten years or more in prison, depending on the gravity of the offense. All of this is done through due process, Mr. Khiame asserted.

Towards the end of the interview, he briefly spoke about the state of security in Syria. He said that “Syrian refugees are welcome in Morocco” and that those who are already in the country should be treated according to international standards. The community of Syrian refugees in Morocco, he added, has a right to “Moroccan hospitality” and “in no way should they be regarded as potential threats or terrorist suspects, as they are mostly women and children.” 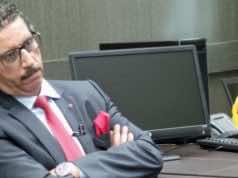