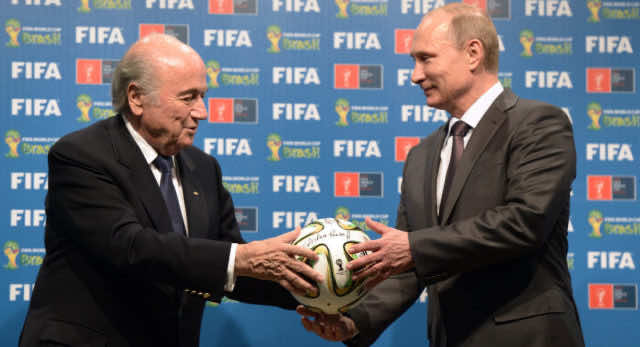 Spanish football news outlet Marca reported that Blatter will watch Morocco’s decisive game against Portugal at the invitation of the Russian president.

To salvage its World Cup ambitions, Morocco’s football team has to make goals in its upcoming game against Cristiano Ronaldo’s squad after losing its first game with an own goal last Friday.

Putin attended the World Cup opening game between Russia and Saudi Arabia, which ended 5-0 in Russia’s favor on Thursday, June 14.

Before the 2018 World Cup vote, Blatter expressed support for Morocco’s 2026 World Cup bid. The 2026 World Cup will be hosted by the joint bid delivered by the US, Canada,  and Mexico after clinching the rights to host the tournament with 134 votes on June 13.

Blatter took to his Twitter on April 5 to criticize FIFA’s task force, an evaluation committee hired by FIFA to evaluate the readiness of the two bids.

“Just recall a fundamental principal [sic] in FIFA: Decision taken in 2011: the congress shall decide on the attribution of the World Cup 2026 – and not any sub-committee or task-force. Each candidate must have the right to make a presentation at the congress.”

FIFA also invited King Mohammed VI to attend the opening of the 2018 World Cup, but the King did not attend.

Morocco will play against Portugal at 1:00 p.m. (Moroccan time) on Wednesday, June 20, at Luzhniki Stadium in Moscow. Morocco’s last game will be against La Roja (Spain) on June 25.

Thousands of Moroccans followed their team to Russia to support them. Despite their defeat against Iran, Morocco are determined to do their best in the tournament.

Moroccan footballer Faycal Fajr said in a press conference on June 17 that the team will try to bring smiles to Moroccan fans.

“We know it will be difficult, but we will do everything to make a good result,” he said.