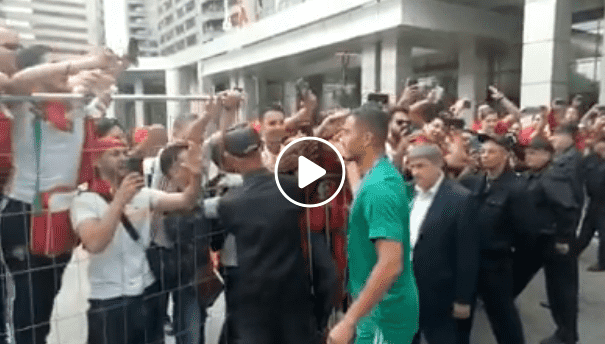 Yesterday, as they prepared to go to their last training session in Moscow before their match against Portugal–with kick off in just an hour–the Atlas Lions were encouraged by fans at their exit from the hotel.

It was Atlas Lion Aziz Bouhaddouz who was the most acclaimed by the crowd as the supporters kept shouting his name to give him motivation to take on the football giant of Portugal.

Bouhaddouz, who left the first World Cup game in tears, was also supported by many celebrities and fans on social media with the hashtag #WeSupportBouhaddouz that went viral shortly after the end of the 0-1 match between Morocco and Iran.

The Moroccan international footballer has also issued an apology to Moroccan football fans after scoring an own-goal on Friday. “I am an idiot, but I will handle this situation because I have been playing this sport for years,” he said.

He added that the situation was difficult, stating, “It is something that can happen in football, and I am paying for it today. I apologize to the team, the fans and all 35 million Moroccans.”