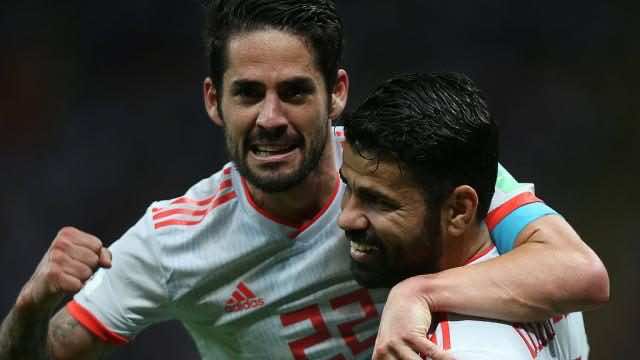 Rabat- Spain took a 1-0 lead against Iran in the 54th minute on a deflection off Spanish striker Diego Costa in the Kazan arena Wednesday.

Spain and Iran, both in Morocco’s Group B, faced each other for the first time ever.

Iran’s 49 completed passes in the first half is the second lowest figure in a World Cup game since 1966. Despite the low possession rate, Iran played defensively, and their strategy worked, ending the first half 0-0.

In the 54th minute, Spain finally took the lead. Spanish midfielder Iniesta nicely assisted Costa, scoring the first goal. Iranian defender Majid Hosseini kicked the ball, causing it to deflect off Diego Costa and into his own goal.

After parking the bus for so long, the Iranian team searched for an equalizer. About 10 minutes after Spain scored their first goal, Iran placed a free kick into the box and Iranian midfielder Saeid Ezatolahi scored. Unfortunately for Iran, he was ruled offside as the video assistant referee (VAR) concurred with the assistant referee’s call.

With inches separating them from scoring their first goal of the tournament, Iranian midfielder Vahid Amiri nutmegged Pique and served a header for forward Mehdi Taremi at the edge of the six-yard-box, but it went over.

Although Spain dominated throughout the entire game, Iran kept them on their toes with a few close counter attacks in the second half, but were still not able to score the equalizer.

Morocco will play its final game against Spain on Monday, June 25th. With Spain and Portugal both having secured a win and a draw and Portugal expected to trounce Iran on Monday, both Iberian countries will almost certainly proceed to the knockout stage of the tournament, leaving Morocco and Iran out of the running.