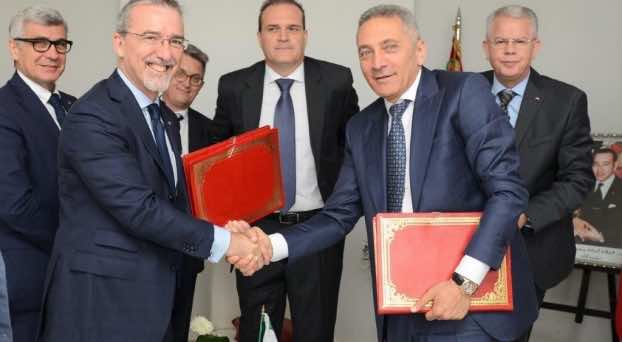 The plant is located in the Tanger Automotive City Free Zone, allowing it to benefit from various tax breaks. Morocco’s Minister of Trade and Industry Moulay Hafid Elalamy attended the ceremony along with CEO of Magneti Marelli Pietro Gorlier and Chairman for the Supervisory Board of the Tangier-Mediterranean Special Agency Med Fouad Brini.

A statement published by the Moroccan Ministry of Industry, Investment, and Digital Economy said on Tuesday that the plant will cost MAD 405 million and will create 500 job opportunities.

The project forms part of an agreement between the Moroccan ministry and the Italian company in 2017.

The plant, which will cover an area of approximately 20,000 square meters, is expected to be operational by 2019.

The project seeks to provide services for the company’s customers in Morocco and in southern Europe: Spain, Italy, and Turkey

Elalamy welcomed the project, emphasizing that “with this industrial project, a new business is developing in Morocco and the national automotive sector gains in integration.”

He added that the company’s project will also benefit local suppliers, from whom the Tangier plant will order materials.

The ceremony also marked the signing of an investment agreement for the construction of a second unit dedicated to the production of lighting systems, electronic systems, and pedals. Elalamy and Gorlier signed the deal.

This new project will cost an estimated MAD 312 million and will create 200 additional jobs, according to the statement.

Commenting on Morocco’s industrial strategy, Elalamy expressed his satisfaction, saying that “we are delighted  that the current dynamics of our automotive industry and the Kingdom’s strong position in this sector have led the Magneti Marelli Group to expand its business in Morocco.”