In a five-four ruling, the US Supreme Court delivered a decision upholding the third iteration of President Trump’s ban on travelers entering the US from seven nations, including five Muslim-majority countries. 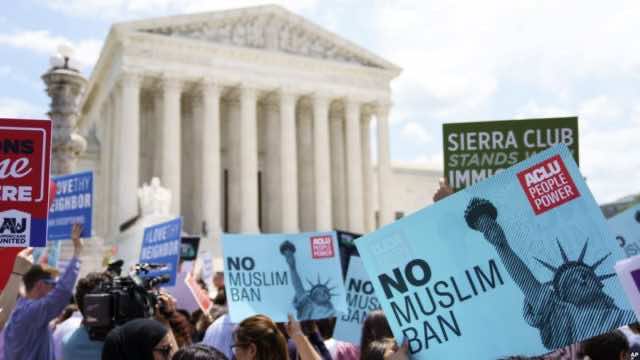 Rabat- What Trump has called a “watered-down” version of his original 2017 executive order affects nationals from Iran, Syria, Libya, Yemen, and Somalia as well as Venezuela and North Korea. The Supreme Court’s majority decision defers to presidential power, stating that the law “entrusts to the President whether and when to suspend entry, whose entry to suspend, for how long, and on what conditions.”

Evolution of the ban

This is the third manifestation of the “Muslim ban” that Trump promised in his presidential campaign; after issuing the Department of Homeland Security to comprehensively evaluate the compliance of information and risk assessment baseline of every nation. Shortly after assuming office he signed Executive Order No. 13769: “Protecting the Nation From Foreign Terrorist Entry Into the United States.”

For 90 days, nationals from seven countries—Iran, Iraq, Libya, Somalia, Sudan, Syria, and Yemen—faced suspension from travel to the US.

After a district court issued an order temporarily blocking the ban, Trump followed with a new executive order, restricting entry for each previously suspended country except Iraq. Courts in Maryland and Hawaii challenged this action. Trump responded with the third similar executive order.

In September  2017, the president issued a proclamation entitled “Enhancing Vetting Capabilities and Processes for Detecting Attempted Entry Into the United States by Terrorists or Other Public-Safety Threats.”

For Iran, North Korea, and Syria, nations that “do not cooperate with the United States in identifying security risks,” all nationals, except those seeking nonimmigrant student and exchange-visitor visas face suspension.

The ban restricts all nationals from Libya and Yemen seeking immigrant visas and nonimmigrant business or tourist visas.

Somalia “was found to present special risk factors,” although it meets standards otherwise.  The ban suspends all nationals seeking immigrant visas and demands greater scrutiny for those seeking nonimmigrant visas.

Venezuela’s ban, by far the least restrictive, limits only specific government officials and their families.

Chad, originally on the list of undesirable nations, “sufficiently improved its practices” for the president to lift restrictions. The Supreme Court’s decision offers Chad as an example of a continuous process of observation and modification by the Department of Homeland Security, which will report suggestions for restrictions to the president every 180 days.

Plaintiffs challenging the proclamation in court were the State of Hawaii, three individual citizens whose foreign relatives are affected by the suspension, and the Muslim Association of Hawaii. They argued that the ban violates the US First Amendment’s  prohibition on establishing a religion and the Immigration and Nationality Act, except as applied to North Korea and Venezuela.

While the four justices in the minority offered dissenting opinions, majority Justice Thomas concurred. Dismissing the grounds of anti-Muslim discrimination as “unpersuasive,” he argued that because the “alleged religious discrimination” within the proclamation is directed at “aliens abroad,” the plaintiffs cannot dispute the order with the First Amendment.

Justice Breyer, one of the dissenting justices, was joined by Justice Kagan in his written opinion that evidence exists to “support the view that the Government excludes [Muslims] for reasons based upon their religion.”

Breyer cited one example of a child in Yemen with cerebral palsy, whose application to enter the US required a circuitous and ambiguous process. “Doctors said she would not survive in Yemen. Her visa application was denied… Though this is but one incident and the child was admitted after considerable international attention in this case, it provides yet more reason to believe that waivers are not being processed in an ordinary way.”

Justice Sotomayor, joined by Justice Ginsburg, dissented as well. She repudiated the “repackaging” of Trump’s original “Muslim ban” rhetoric and said the majority decision “leaves undisturbed a policy first advertised openly and unequivocally as a ‘total and complete shutdown of Muslims entering the United States’ because the policy now masquerades behind a facade of national-security concerns.”

According to a key adviser of Trump, “When [Donald Trump] first announced it, he said, ‘Muslim ban.’ He called me up. He said, ‘Put a commission together. Show me the right way to do it legally.’”

Sotomayor concluded her dissenting opinion with a focus on religious discrimination: “Our Constitution demands, and our country deserves, a Judiciary willing to hold the coordinate branches to account when they defy our most sacred legal commitments.”

US Attorney General Jeff Session called the decision “a great victory for the safety and security of all Americans” and “critical to ensuring the continued authority of President Trump — and all future presidents — to protect the American people.”

Protecting the American people is the rhetoric used by Trump to justify the controversial proclamation.

“In this era of worldwide terrorism and extremist movements bent on harming innocent civilians, we must properly vet those coming into our country,” Trump said.

“As long as I am President, I will defend the sovereignty, safety, and security of the American People, and fight for an immigration system that serves the national interests of the United States and its citizens. Our country will always be safe, secure and protected on my watch.”

Supreme Court analyst Stephen Vladeck agreed the result was a victory for the White House. “The Supreme Court has reaffirmed the President’s sweeping statutory authority when it comes to deciding who may and who may not travel to the United States,” he said. “Authority that both President Trump and future presidents will surely rely upon to justify more aggressive immigration restrictions.”

John Bellinger, who served under the Bush administration, said, “It’s still a pig, but the administration has put just enough lipstick on it for it to look pretty for five of the nine justices.”

The first Muslim elected to the US Congress, Keith Ellison, stated that upholding the ban gives “legitimacy to discrimination and Islamophobia.”

Civil Rights Director for the Washington chapter of the Council on American-Islamic Relations, Jasmin Samy, expressed disappointment as well. “The Muslim ban in itself impacts negatively the community that lives here. So, people don’t see the rhetoric that’s happening because of the Muslim ban.”

Protesters across the United States gathered in streets with posters reading, “Say No To Scapegoating Muslims” and “No Hate, No Fear, No Ban.” Some posters read, “We are all immigrants!” and “ALL Religions Welcome Here.”

Democratic House of Representative Leader Nancy Pelosi predicted that the ban will backfire as a “recruiting tool” for terrorists.

“The President’s disdain for our values and the safety of the American people has led him to undermine relationships with critical allies, embrace autocrats and dictators, launch damaging trade wars and sow fear in our communities with his hateful, ugly language,” Pelosi said.

“Whether tearing children from their parents at the border or advancing a ban founded on open bigotry, President Trump is making our nation less safe at home and less respected abroad.”

The ban is currently in effect and will remain essentially as law. 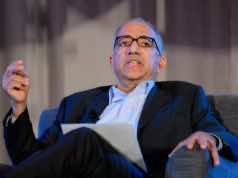