Rabat - The introduction of video assistant referee (VAR) technology in the 2018 World Cup in Russia was intended to eliminate controversy and criticism over refereeing decisions. 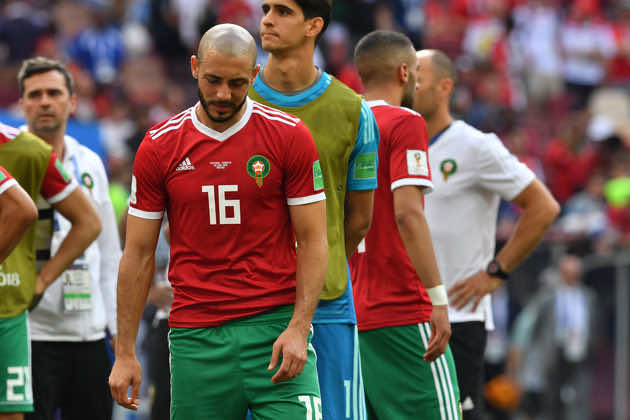 By
Tarek Bazza
-
Tarek Bazza is a journalist at Morocco World News with Master’s degree in Translation from King Fahd School of Translation in Tangier.
Jun 28, 2018
Spread the love

Rabat – The introduction of video assistant referee (VAR) technology in the 2018 World Cup in Russia was intended to eliminate controversy and criticism over refereeing decisions.

However, the new technology service has not only brought severe criticism and even protest against referees’ decisions, but against the way in which this service was used as well.

As has been seen during many matches of the 2018 World Cup, VAR has often been consulted when major teams stood to gain against smaller teams.

While France was awarded a penalty in its opening match against Australia after the referee had consulted VAR, Iceland thought VAR should have been used to award them a penalty in their game against Argentina.

VAR was again employed when Peru was awarded a penalty in their match against Denmark.

As for the match of Portugal against Iran, the referee awarded a penalty for the Portuguese after Cristiano Ronaldo fell inside the penalty area. Again, the referee had decided to resort to VAR. Iran was fortunate that Cristiano missed the awarded penalty kick, thanks to the Iranian goalkeeper. In contrast, VAR was not used when Ronaldo appeared to elbow Morteza Pouraliganji, the Iranian player, escaping a red card as a result.

In response to this, Iran’s coach Carlos Quieroz said in a news conference “Elbow is a red card in the rules, the rule doesn’t say if it’s Messi or Ronaldo.” 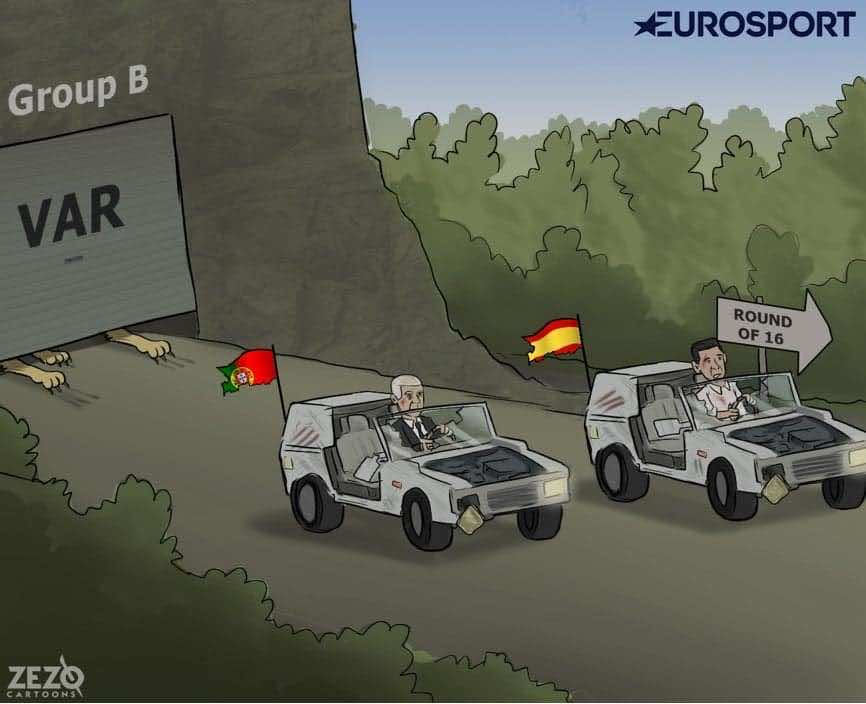 VAR not used for Morocco

VAR was not used in Morocco’s favor. The Atlas Lions strongly protested that their referees did not use VAR, which was one of the main reasons they were eliminated from the World Cup in Russia.

This was demonstrated Morocco-Portugal game, where the Moroccan team suffered a great injustice of not being given two clear penalties, after the referee refused to resort to VAR, claiming that his radio, which is connected with the VAR room in Moscow, was not properly working.

Then in the Spain-Morocco game on Monday, VAR was employed in the last five minutes to rule that Spain’s Iago Aspas had not been offside, allowing the equalizing goal.

On the other hand, the VAR team did not see that a ball kicked by Spain’s Rodrigo Moreno had crossed the goal line before touching Ghanem Saiss’ foot. The action should have awarded a goal kick to Morocco. Instead, the corner was awarded to Spain, but played from the other side without any inference from the linesman. 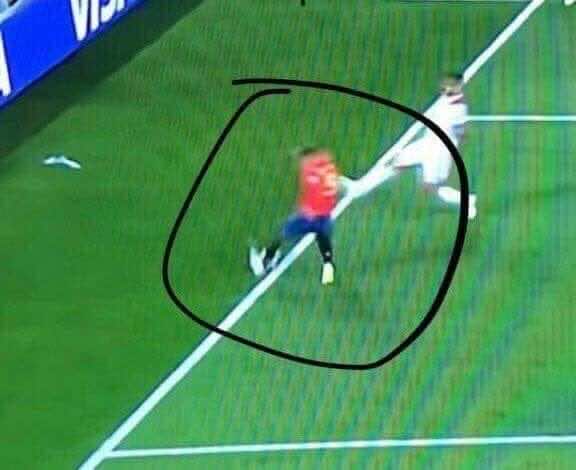 In addition, there was a handball by Spain’s Gerard Piqué in the penalty area that was not whistled.

Morocco’s team protested when Piqué launched a two-footed tackle to dispossess Morocco’s Khalid Boutaib. Again, there was no interference from the VAR control room or any reaction from the referee to ask for their assistance. 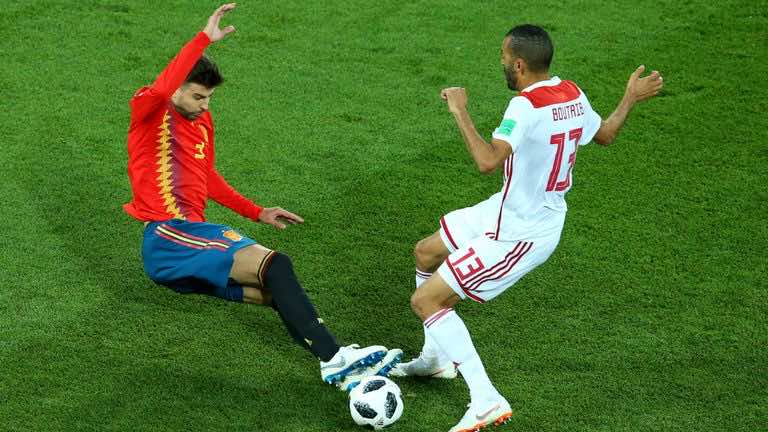 Mohamed Aboutrika, sports analyst for beIN Sports channel commented on the match: “The Moroccan national team was subjected to injustice by not resorting to VAR in their match against Spanish team.”

“VAR is forbidden to the Moroccan team in 2018 World Cup in Russia. There is something that suggests that this is intentional,” he added. VAR “is useful only for major teams and it’s not fair.”

Morocco’s midfielder Youssef Naciri said in an interview with beIN, “The video technique is used whenever they [VAR control room] want. We had the right to be awarded three penalty kicks, but they refused to use the video technique. But when the other team asked for the VAR assistance, they responded to it.”

Football teams may not be treated the same way when it comes to using VAR. The injustice Morocco suffered because VAR was not used was seen as racial, and the Atlas Lions could have qualified for the next round if it was used for them.

FIFA is required to interfere if there was prejudice in the choice of when to use VAR for Morocco in the first round of the 2018 World Cup in Russia. The referee leading the match between Morocco and Portugal should be punished for not awarding two penalties especially since he was near the two incidents which could have changed the match final result.

According to FIFA, VAR assists the referee to determine whether there was an infringement that would disqualify a goal. “As the ball has crossed the line, play is interrupted so there is no direct impact on the game.” VAR does not make any decisions. It supports the referee in the decision-making process, and the final decision can only be made by the referee.

When is VAR used?

The main incidents that have been identified as game-changing by FIFA are: 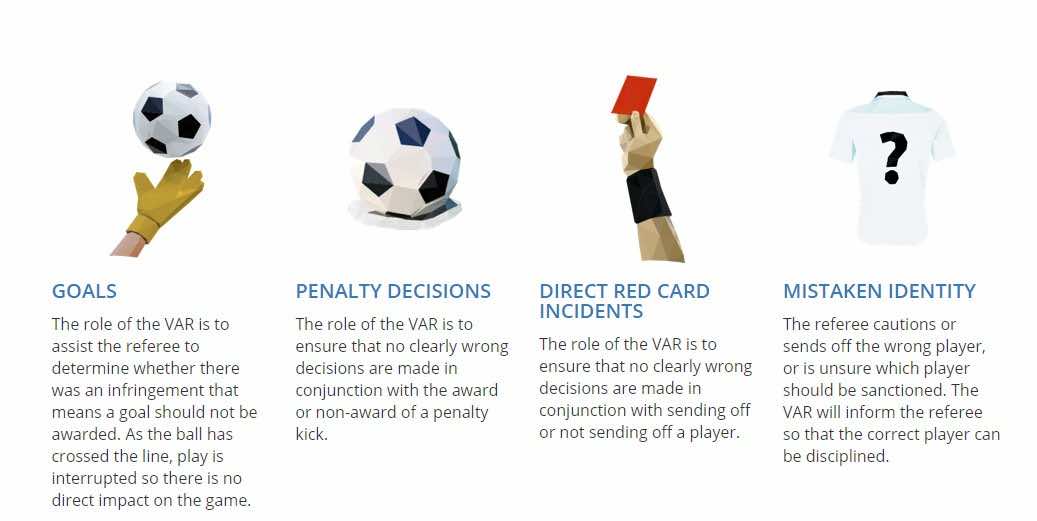 Despite the benefits of VAR used in the 2018 World Cup in Russia, this video technique has been strongly criticized for being consulted in favor of major teams against smaller ones. Refusing the use of VAR when the Moroccan team was in strong need of it has led to a state of anger among fans, describing this as an injustice and biased against the Atlas Lions.