Rabat - Atlas Lion Achraf Hakimi shared his football knowledge in Tetouan. After spending some well-earned rest in Ibiza and Marrakech, the 19-year-old football sensation took some time to give football lessons to kids in a club north city. 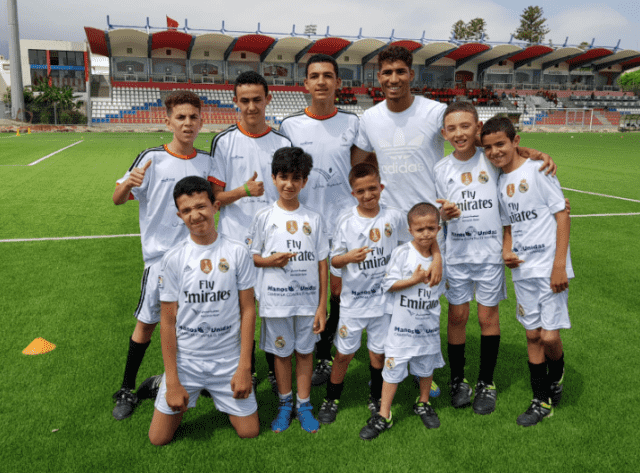 Rabat – Atlas Lion Achraf Hakimi shared his football knowledge in Tetouan. After spending some well-earned rest in Ibiza and Marrakech, the 19-year-old football sensation took some time to give football lessons to kids in a club north city.

Real Madrid’s midfielder will conduct a three days formation, showing the extent of his talent from July 7-9 in a campus dedicated to children from 9 to 17 years.

Hakimi who is nominated for the Golden Boy 2018 has a lot to teach to the youngest. Indeed, he just finished a great season with Real Madrid, winning the Champion’s league. The Moroccan sensation also delivered a spectacular performance in the 2018 World Cup against the deadly group of the World Cup: Group B.

On his twitter account, Real Madrid’s midfielder shared pictures of his journey with the kids who seemed to be enjoying Hakimi’s company.

“Today #CampusAchraf has started. Ahead three days of football, activities, fun and surprises,” wrote the football player in a first tweet, adding that he is having a great time, recalling the campus “Campus Achraf.”

Vacationing in Morocco aside, Hakimi will be busy upon his return to Spain. According to the well-informed Spanish outlet Marca, the Moroccan’s club Real Madrid and German club Borussia Dortmund have almost closed the deal for the loan of the 19-year-old player.