Rabat - The German cabinet has approved a draft bill that would declare Morocco, Tunisia, Algeria, and Georgia “safe countries of origin,” speeding up the process to deport rejected asylum applicants from the four countries.

Rabat – The German cabinet has approved a draft bill that would declare Morocco, Tunisia, Algeria, and Georgia “safe countries of origin,” speeding up the process to deport rejected asylum applicants from the four countries.

In order to be enacted, the draft law will need to be approved through a vote by the lower house of parliament.

Based on the 1951 Geneva Convention Relating to the Status of Refugees, asylum seekers must prove that they are facing “fear of persecution” for certain circumstances, including race, religion, nationality, or political views.

Members of Germany’s federal cabinet, however, believe that some people applied for asylum to escape financial situations and are “misusing” Germany’s asylum, according to Deutsche Welle (DW).

The German government has approved only “a tiny fraction of asylum applications” from the three Maghreb countries, according to DW.

Morocco World News contacted the German Ministry of Foreign Affairs, asking for the factors that led the German cabinet to re-evaluate safety in Morocco for refugees, but has not received an answer yet.

Germany’s Minister of Interior Joachim Herrmann said he believes that people from the three Maghreb countries have no right to seek asylum.

“As a rule, someone from Tunisia, Algeria or Morocco has no right to asylum, but we want only those people to stay in Germany who truly are persecuted,” he said.

The cabinet’s decision, however, has been receiving backlash from opposition parties, including Greens and the far-left Die Linke. The parties condemned the reevaluation of the law, labeling the three Maghreb countries “unsafe.”

The president of the Greens explained his party’s stance, claiming that the three countries are not a safe home for “journalists, minorities and homosexuals.”

“There are reports of torture and unfair court proceedings. Therefore I cannot see how these states are safe,” he added.

The German government has been blaming an increase in the crime rate on the rise of refugee numbers for the past three months.

Federal statistics, according to the Irish Times, show that nearly 300,000 crimes were linked to refugees/asylum seekers in 2016. The number represents a 42 percent rise in crime year-on-year, said the outlet.

The president of the Green party, however, denounced the government’s statistics: “If it’s about dealing with crime in Germany, then you need a well-equipped police force.”

The cabinet has been attempting to pass this law since 2016, when all German lawmakers in the lower house of parliament voted for the decision. The decision, however, was not approved by the Bundesrat (the upper house of the German parliament).

UNHCR’s stance on deportation of refugees

According to the Office of the United Nations High Commissioner for Refugees (UNHCR) countries receiving refugees must protect them; once a refugee crosses a border, the hosting country is obliged to offer them rights and protection.

However, migrants are people who choose to leave their mother country “not because of a direct threat of persecution or death, but mainly to improve their lives by finding work, or in some cases for education, family reunion or other cases,” according to the UNHCR. 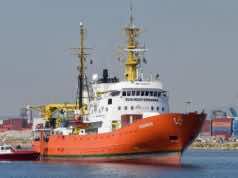