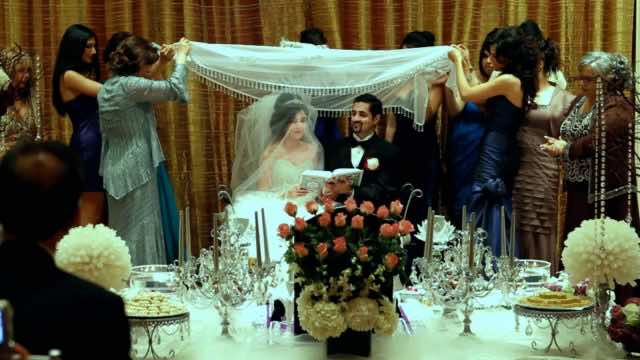 Rabat – Marriage—what is the point of it? It is to bring two people together through love, to build an economic relationship through which families can unite, to satisfy social and cultural requirements for men and women, for women to find a means of economic sustenance, or for males to exploit females for their household labor.

Throughout the world, understandings of marriage and the reasons why people marry seem to vary greatly.

Such is the case in Iran.

Relationships between men and women are strictly controlled. Men and women who are not married, or are not members of the same family, are usually forbidden to socialize with each other.

The only way that men and women of different families are allowed to interact with each other is through marriage. It is also the legal way to constitute a family and to protect women’s and children’s rights. Once a woman is married, she then has the rights to a pension, housing, and inheritance from her husband. It is also through marriage that a woman can ensure the responsibility of a male for any children that come out of the relationship.

Sexual relationships outside of marriage are not allowed, a rule that is enforced by the country’s moral police. They will arrest and imprison men and women when found together if they are not married or part of the same family. The situation is easing up a bit in cities such as Tehran; however, the strict rules segregating men and women continue to be enforced throughout the country.

However, despite these strict moral codes surrounding sexual relationships and marriage, Iranians, and Shia communities in general, have found ways to defy the “no sex outside of marriage” laws. They do this through what they have termed “temporary marriages.”

The temporary marriage is literally translated as ‘pleasure marriage’ (nikah mut’aa) and is for a limited amount of time. The couple agrees on the time period of the marriage, which in Iran is usually between three and six months. In many cases, a certain amount of money is given to the woman in exchange for the marriage. However, in some cases, men and women who are in a relationship and want to be able to live together also have a temporary marriage.

They are typically carried out in mosques with the ceremony being performed by a Mullah. A piece of paper is signed in front of the Mullah and it is agreed that they are married. They are then allowed to engage in physical relations.

According to Islamic oral tradition, the practice of temporary marriage is mentioned in some hadiths and is believed to have existed during the life of Muhammad, who is said to have recommended it to his companions and soldiers.

Sunni scholars no longer consider it applicable and have raised concerns about the ethical implications of this type of marriage. However, Shia scholars continue to justify it as ‘a solution’ to the sexual needs of those who are not able to commit to a regular marriage.

For example, Ali Qasemi, a young Iranian man working in the local bazar in Qom—one of Iran’s most religious cities—feels that temporary marriages are a way of disregarding Islamic law that prohibits sex outside of marriage. “People in society don’t like temporary marriages,” he explained.

A university student in Tehran agrees with Qasemi: “These things are just excuses for religious men to be with other women. It doesn’t have a logical reason. I’m really against temporary marriages. If you want to be with someone just go be with them, why do you have to do these things? Why should I have to sign something just so I can touch a man? It’s really stupid. But you know these things are happening in Iran,” she said.

Fatima Rezaeepour, a young English teacher living in Qom, also does not like temporary marriages. She stated: “Some boys don’t want to look for sex outside of marriage because it is against their religion, so they have a temporary marriage.”

Temporary marriages also tend to favor men. A woman is expected to be a virgin until she is married. If she loses her virginity outside of marriage, then she is no longer considered fit for marriage and is therefore no longer socially valuable. Men, however, are not subject to the same ideas of shame and are therefore free to engage in temporary marriages without such stigma, whereas women cannot.

Mahkan Jahandide, a Baluch woman in the city of Zahedan, believes that temporary marriages are done so that men can cheat on women. “They are just for 6 months so they can then find another woman. They just take a woman as a wife, they use her and then they will tell her to go,” she explained.

Afshin Bakhshesh, a student living in the southern coastal city of Chabhar, agrees that temporary marriages tend to just suit men: “If you are a married man but if you travel alone then you’re allowed to have a temporary marriage. It is just to look after your own sexual needs. I don’t like it at all. This is so messed up. These are religious ideas and are an excuse to have sex with others,” he said.

Temporary marriages are just one example of the many misogynistic religious rules that have been made by men based on their narrow selective interpretations of Islam in order to take advantage of women. They give men the right to have multiple sexual partners while stigmatizing women who do the same. They encourage moral contradictions that allow men to avoid extra-marital sex laws while not allowing women to do the same.

So we must ask ourselves, what is the point of a marriage if it is just being used to benefit men? In the case of temporary marriages in Iran, the concept of marriage is being used as a means for males to get around religious rules of not having sex outside of marriage, something in the case that all of the Iranians interviewed for this article said was the case. This raises a very important question about the real purpose of marriage, temporary or otherwise, in Iran and indeed throughout the world. We should be asking ourselves why these concepts of marriage, are so often set up to benefit men? This is something that we should all be asking ourselves and actively working towards.