Rabat- A video has circulated social media, capturing the distressing conditions of a psychiatric hospital in an unspecified location in Morocco.

By
Ahlam Ben Saga
-
Ahlam Ben Saga is a Cultural Studies graduate from university Mohammed V of Literature and Humanities in Rabat.
Aug 6, 2018
Spread the love

Rabat- A video has circulated social media, capturing the distressing conditions of a psychiatric hospital in an unspecified location in Morocco.

Not long after a distressing video of Casablanca’s Ibn Rochd University Hospital (CHU) circulated online, a new video showing the distressing conditions in a public psychiatric hospital has surfaced.

The hospital’s reception room was filled with the hysterical cries of a patient who was lying on the ground, in apparent need of medical attention.

Similar to the video shot in Ibn Rochd Hospital, no doctors or nurses were in sight. Only the panicked families of patients were seen, expressing distress and condemning the poor conditions of the hospital.

“People are dying, look how many people are waiting here. Shame,” stated the man who recorded the video.

The man also said doctors rarely show up to the hospital: “All doctors show up only for 30 minutes and leave.”

A woman whose son was suffering from an illness tearfully shared about how doctors would not even make an appointment to treat her son.

In the video taken by a French tourist at CHU, patients were seen lying on the unhygienic floor of the hospital’s emergency wing where no emergency equipment, doctors, or nurses could be seen.

The tourist denounced the poor conditions of the hospital, saying:

“People are dying, and if you don’t have money you can’t get treated… do you find this normal? In a country like Morocco that prefers to construct roads and other things rather than treat the sick.”

The videos were not the first to record the tragic state of Moroccan hospitals, especially public hospitals which lack equipment, medicine, and medical staff.

The government has promised to improve the country’s healthcare system, measures which include its new agreement with the World Health Organization (WHO).

Recently, the director general of WHO, Tedros Adhanom Ghebreyesus, pledged to support Morocco’s ambition to extend the national health insurance to low-income and disadvantaged people. 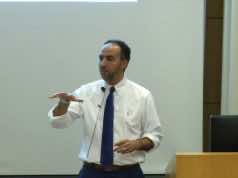