Rabat - The Royal Spanish Football Federation president has said he is delighted with Morocco’s organization of the Spanish Super Cup final. 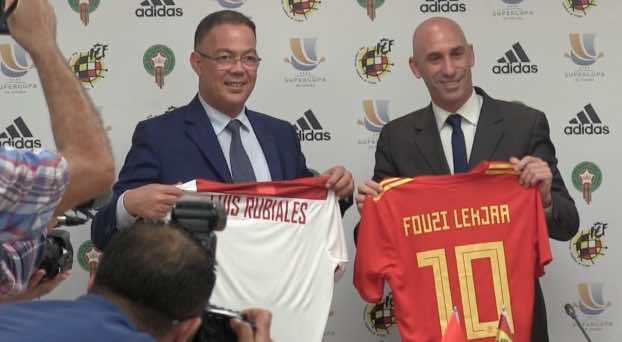 Rabat – The Royal Spanish Football Federation president has said he is delighted with Morocco’s organization of the Spanish Super Cup final.

President Luis Manuel Rubiales made his appreciatory remarks today in a press conference with the president of the Royal Moroccan Football Federation (FRMF), Fouzi Lekjaa.

Rubiales is convinced that all conditions are fulfilled for a great football meeting between Sevilla FC and FC Barcelona, on August 12, in Tangier’s Ibn Batouta stadium.

“It was an easy decision to go for Morocco and Tangier. I am convinced that we will experience a joint celebration with a great Moroccan public, who are great football fans,” Rubiales said.

“For us, it’s an honor to play the Spanish Super Cup in Morocco, a country that is at the forefront of African football,” he added, highlighting the ancestral relations uniting Spain and Morocco in all fields.

“Spain and Morocco are two friendly countries united by history and geography, but also by values and passion for football,” said the former player of Levante and Alicante. He said that thanks to this match, the milestones of a fruitful cooperation are set to move forward in the cooperation between the football authorities of the two countries.

“The great goal of this meeting FC Barcelona / FC Sevilla is to unite our two populations, which is the essence of sports and football,” said Rubiales.

Morocco is a nation of football whose team showed professionalism and high technical quality at the last World Cup held in Russia, concluded the president of the FRMF.

This will not be Tangier’s first experience as a “neutral site” for foreign leagues, as the city’s stadium hosted the French Super Cup on two occasions: the 2011 Super Cup between Lille and Marseille (4-5) and the 2017 Super Cup between Paris Saint-Germain and Monaco (2-1).