Rabat - Over 200 Kenyans and Americans gathered together Tuesday to in solidarity, remember the 20th anniversary of the 1998 US Eembassy bombings in Tanzania and Kenya. 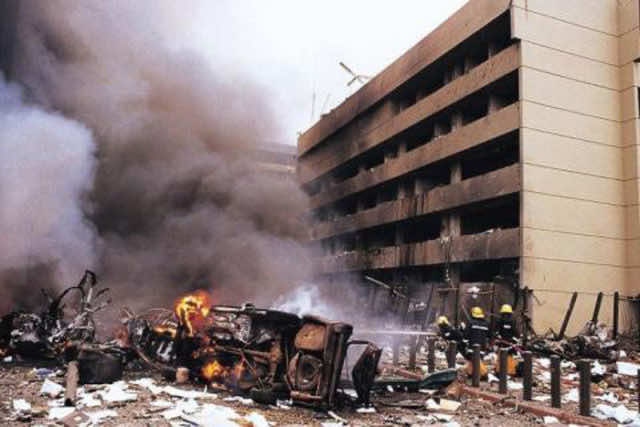 Rabat – Over 200 Kenyans and Americans gathered together Tuesday to in solidarity, remember the 20th anniversary of the 1998 US Eembassy bombings in Tanzania and Kenya.

The crowd congregated at August 7th Memorial Park in Nairobi, built on the original site of the US eEmbassy in Kenya. On August 7, 1998, Al-Qaeda targeted the US embassies in Kenya and Tanzania with simultaneous truck bomb explosions.

In both attacks combined, 258 people lost their lives. Nearly 5,000 were injured.

The deadly day in 1998 marked eight years since US troops, near the beginning of the Persian Gulf War, arrived in Saudi Arabia. It also marked the first major Aal- Qaeda attack in history, the publicized debut of the terrorist group responsible for killing thousands of civilians and fellow Muslims.

Of the approximately 200 guests at, many had survived the 1998 attack or lost close relatives to the bombs. Thaddeus Mutiiria Nyaga’s son, Emmanuel, lost his life August 7, 1998.

“We forgive those who hurt us, but we may not forget,” Nyaga said. “Let’s pray for them to change their mind so that we can live happily together.”

At the memorial event, US Ambassador Robert Godec spoke about the moment when “twenty years ago today, evil showed its terrible face in Kenya and Tanzania.”

Who is Aal -Qaeda?

Their name means “The Base” or “The Foundation.” Composed of Sunni Muslim militants, Aal- Qaeda stretches across multiple nations, with territorial control in Somalia, Syria, and Yemen.

Believing in an alliance between Jews and Christians to dismantle Islam, the organization holds a staunch anti-JewishSemitic position. Al -Qaeda ascribes to interpretations of the Qur’an that condone killing non-combatants and stands in opposition to “man-made” laws, instead advocating for absolute sSharia law.

Currently leading the organization is Ayman al-Zawahiri, who assumed his position following the 2011 death of Osama bin Laden. In recent years, the focus of anti-terror efforts has turned to the Levant and ( ISIS) rather than aAl- Qaeda.

Additionally, Kenyans affected by the 1998 bombing still wait for compensation from the US, as the nation had compensated US citizen embassy employees.

“You have to ask, do they care about the dreams and aspirations of the survivors? The unity the ambassador is talking about is a fallacy.”

Attorney Philip Musolino, based in Washington, D.C., currently represents 538 victims of the attack hoping for compensation.

Kenya’s Director of Counter-Terrorism Martin Kimani acknowledged the threat and past scars of terrorism during a speech at the August 7 gathering, but asserted, “Our country has taken giant strides to prepare better to be more ready, and part of that readiness is our cooperation with our friends.”

Hope for a future for peace

At August 7th Memorial Park in Nairobi, a Peace Memorial Museum honors the victims of the 1998 Al al-Qaeda attack, as well as those who survived to tell of the national tragedy.

It seeks to tell their stories, educate the public on terrorism and its consequences, and teach its visitors the value of peace and reconciliation.

Their mission statement reads: “By the end of the museum tour it is hoped that each person will be inspired to support peace.”