By
Tarek Bazza
-
Tarek Bazza is a journalist at Morocco World News with Master’s degree in Translation from King Fahd School of Translation in Tangier.
Aug 18, 2018
Spread the love

Annan’s foundation issued a statement on Annan’s Twitter account this morning that described him as a “global statesman and deeply committed internationalist who fought throughout his life for a fairer and more peaceful world.”

According to the statement, Annan died after a short illness in hospital in Bern, Switzerland. His wife, Nane, and children Ama, Kojo and Nina, were by his side “during his last days”.

It is with immense sadness that the Annan family and the Kofi Annan Foundation announce that Kofi Annan, former Secretary General of the United Nations and Nobel Peace Laureate, passed away peacefully on Saturday 18th August after a short illness… pic.twitter.com/42nGOxmcPZ

“Kofi Annan was a guiding force for good.  It is with profound sadness that I learned of his passing.  In many ways, Kofi Annan was the United Nations. He rose through the ranks to lead the organization into the new millennium with matchless dignity and determination.”

“Like so many, I was proud to call Kofi Annan a good friend and mentor. I was deeply honoured by his trust in selecting me to serve as UN High Commissioner for Refugees under his leadership. He remained someone I could always turn to for counsel and wisdom — and I know I was not alone,” Guterres added.

Kofi Annan was a guiding force for good. I join the world in mourning his loss. In these turbulent and trying times, his legacy as a global champion for peace will remain a true inspiration for us all. https://t.co/psJ9viPIeu pic.twitter.com/SKfBk5zaY2

The UN Migration Agency tweeted: “Today we mourn the loss of a great man, a leader, and a visionary.”

Annan served as seventh secretary-general of United Nations between 1997 and 2006.

Annan was awarded the Nobel Peace Prize jointly with the United Nations in 2001 “for their work for a better organized and more peaceful world.”

Kofi Annan will be remembered for his AIDS initiatives and global diplomacy. “To live is to choose. But to choose well, you must know who you are and what you stand for, where you want to go and why you want to get there,” he said.

The diplomat was born in Kumasi, Ghana, on April 8, 1938. Annan graduated from Mfantsipim School, a high school in Cape Coast in Ghana in 1957, the same year Ghana gained independence from Britain.

He then studied at the University of Science and Technology in Kumasi in 1958. He then received a Ford Foundation grant and completed his undergraduate work in the US, studying economics at Macalester College in St. Paul, Minnesota, in 1961.

Kofi Annan believed that “education is a human right with immense power to transform. On its foundation rest the cornerstones of freedom, democracy and sustainable human development.”

In 1961, Annan pursued graduate studies in economics at Geneva’s Graduate Institute of  International and Development Studies.

In 1972, Annan received a Master of Science degree in management from the prestigious Massachusetts Institute of Technology.

Annan’s career in the UN

The Ghanaian diplomat’s career with the UN began in 1962 when he joined as an administrative and budget officer with the World Health Organization in Geneva.

Annan served in many UN organizations across the world in the next 30 years: the UN Economic Commission for Africa in Addis Ababa; the UN Emergency Force (UNEF II) in Ismailia, Egypt; and the Office of the United Nations High Commissioner for Refugees in Geneva.

Between 1974 and 1976, Annan took a short break from his international civil service to work as the director of tourism in Ghana from 1974 to 1976.

Initiatives at the UN

As secretary-general, Annan’s first major initiative was his plan for reform, “Renewing the United Nations.” The plan was presented to the member states in July 1997.

In April 2000, he issued a Millennium Report, named “We the Peoples: The Role of the United Nations in the 21st Century.” In his report, Annan called on member states to “commit themselves to an action plan for ending poverty and inequality, improving education, reducing HIV/AIDS, safeguarding the environment and protecting peoples from deadly conflict and violence,” according to the UN.

In April 2001, Annan proposed the establishment of a “Global AIDS and Health Fund” to help developing countries deal with the HIV crisis as he considered the pandemic his “personal priority.”

After leaving the UN, Anan returned to Ghana where he got involved with many organizations, such as the Global Humanitarian Forum, The Elders, United Nations Foundation, and One Young World.

The former UN secretary-general was fluent in many languages. He spoke English, French and several African languages, including Kru and Akan. 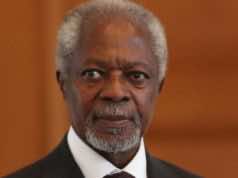 Annan to discuss Syrian crisis in Washington as crackdown continues