Rabat- Four young Moroccans are competing in the International Olympiad in Informatics (IOI), one of the world’s largest computer science competitions for students. 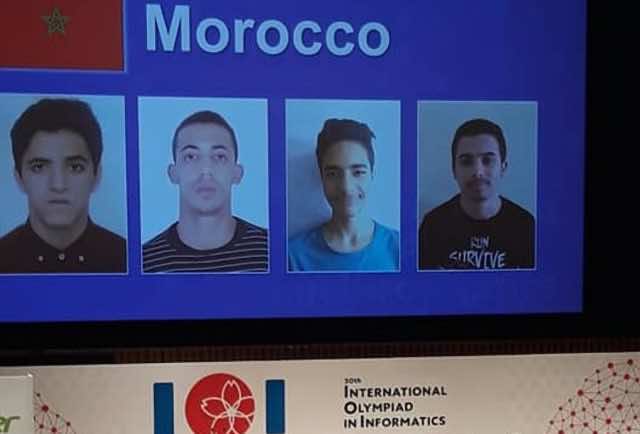 By
Ahlam Ben Saga
-
Ahlam Ben Saga is a Cultural Studies graduate from university Mohammed V of Literature and Humanities in Rabat.
Sep 6, 2018
Spread the love

Rabat- Four young Moroccans are competing in the International Olympiad in Informatics (IOI), one of the world’s largest computer science competitions for students.

The four Moroccan contestants, Anas Choukri, Anouar Achghaf, Bilal Elbouardi, and Houssam Hanafi, are competing with 340 students in teams of four representing their countries in the 30th IOI.

This year’s IOI is being held in Tsukuba, Japan, from September 1 to 8, marking the participation of 85 invited countries. Princess Kako of Akishino, granddaughter of Japan’s Emperor Akihito and his wife Empress Michiko, attended the opening ceremony.

Anouar Achghaf, from the northern city of Tetouan, is participating for the first time in the competition and currently ranks 269th globally.

Bilal Elbouardi, from Sidi Bennour city near Casablanca, is participating for the first time and ranks 332nd globally.

Anas Choukri, from Beni Mellal in central Morocco, is a computer engineer participating for the second time, ranking 324th globally. His previous global rank in 2017 was 300th.

Houssam Hanafi, from Khemisset city east of Rabat, is participating for the second time, ranking 318th globally. His previous global rank in 2017 was 294th.

The team’s deputy leader, Moncef M’Hasni, works as an aeronautical engineer and is coaching the Moroccan participants during the competition.

IOI is one of the most prestigious programming competitions, second only to the International Mathematical Olympiad in the number of participating countries.

The number of countries participating in the competition continues to increase, according to IOI.

Participants come from all over the world: from China, Australia, Nigeria, Spain, Russia, and even Azerbaijan. From the Maghreb region, Tunisia is the only other country sending participants.

In 2017, 83 countries participated in the 29th IOI in Iran. Israeli students, unable to participate in Iran for political reasons, competed from IOI’s offsite competition organized in Russia.

The first IOI was held in 1989 in Pravetz, Bulgaria. The main objectives of the competition are to “discover, encourage, bring together, challenge, and give recognition to young people who are exceptionally talented in the field of informatics.”

IOI also aims to strengthen international relationships in the context of computer science and informatics, and encourage countries to host and organize IOI. The host country often organizes cultural and social programs on the sidelines of the competition.

Participating countries choose a team of up to four contestants to represent their nation, in addition to a team leader and deputy.

During the competition, contestants compete individually and work to increase their scores by solving informatics problems.

At the award ceremony, contestants with top scores receive either gold, silver, or bronze medals depending on their rank.