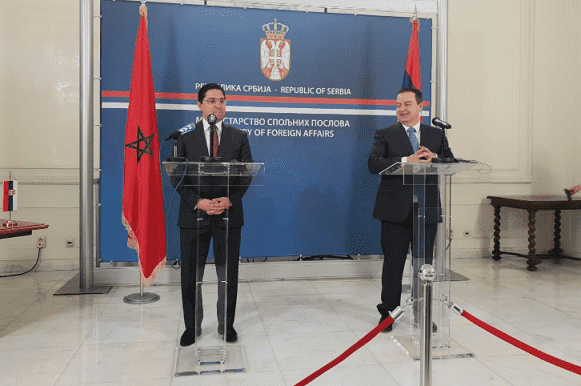 After the audience, the Serbian president told Moroccan press that he reaffirmed his country’s support for Morocco’s territorial integrity.

Vucic also called for the strengthening of bilateral ties with Morocco in various fields.

The meeting, according to the Serbian president, aimed to discuss issues of common interest.

In June, Vucic expressed his country’s intention to give new impetus to the economic relations between Morocco and Serbia.

During his meeting with Morocco’s Speaker of the House of Representatives Habib El Malki, the Serbian head of state said that he has “great esteem and consideration for Morocco.”

On Tuesday, Bourita also met his Serbian counterpart Ivica Dacic, with whom he signed a memorandum of understanding in the field of youth and sports.

Both officials co-chaired a press conference to discuss the countries’ policies.

The agreement followed two other cooperation agreements between Dacic and Bourita in March.

The agreements, which focused on the fields of diplomatic training and culture,  were signed during Dacic’s visit to Morocco.

Both officials also agreed to hold the second session of their joint committee which will focus on economic and trade cooperation.

The joint committee is scheduled to meet before the end of the year in Morocco.

Dacic expressed positivity over the joint committee, emphasizing that it should be held as soon as possible, with a view to developing economic ties.

Morocco and Serbia want to forge ties in the fields of agriculture, energy, and technology.

Dacic also reaffirmed his country’s support for Morocco’s integrity, saying that his country believes that the “the autonomy proposal [in the Sahara] submitted by Morocco falls fully and perfectly within this framework.”

The Serbian official also expressed his gratitude to Morocco for its support of the territorial integrity of Serbia.