The monarch addressed a message to the Nelson Mandela Peace Summit held at the UN headquarters in New York.

After his greeting to the participants of the summit, the monarch said that the whole world “admires” Mandela for his “strength of character, his concern for vulnerable people and his fight, throughout his life, against discrimination and inequality.”

According to the King’s message, read by Morocco’s Minister of Foreign Affairs Nasser Bourita, Nelson Mandela was the “embodiment of an unshakeable faith in the virtues of dialogue, peace and tolerance.”

The Nobel Peace Prize winner fought hard for justice, equality, and peace. He also dreamed of an end to people’s struggles and injustice in the world.

The King recalled the friendly relationship Mandela had for Morocco and the support the North African nation gave for the African leader.

The monarch said that Mandela “had sincere affection for my late father His Majesty King Hassan II.”

He said that the affection was “mutual” as Morocco provided “unconditional” support for African liberation movements.

The King then recalled that Mandela lived in Morocco between 1960 and 1962 “where he received the Kingdom’s support for his legitimate struggle.”

The background given by the monarch aimed at underscoring “the convergence of two courses of history and the sense of a common commitment” rather than reminding “everyone of Morocco’s leading role in providing support to Mandela,” he said.

The King also said that Mandela is among the African leaders “who were committed to humanist values and lofty principles.”

In his long address to the Nelson Mandela Summit, the King spared no efforts to describe Mandela as a hero.

Mandela died in his home in Johannesburg, South Africa, on December 5, 2013.

The King said that Mandela showed dialogue and negotiation can be pursued.

“Unfortunately, however, even when peace was within reach at times, we often let the occasion slip,” regretted the monarch.

In 1995, Mandela publicly paid tribute to Morocco in a speech, thanking King Hassan II and his minister for African affairs for supporting him with funding, training, and weapons for his struggle.

The King did not hesitate to respond to the requests of Mandela.

According to Mandela, the King “understood my mission very well.” He added that the King asked him what “arms do you want, and where should I deliver them.”

Referring to the world’s loss, King Mohammed VI concluded his message saying, “We find his absence so unbearable that we prefer to celebrate his birth—one of those births that are honored worldwide. Another birth that humanity owes to Africa.” 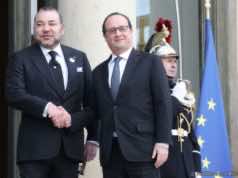