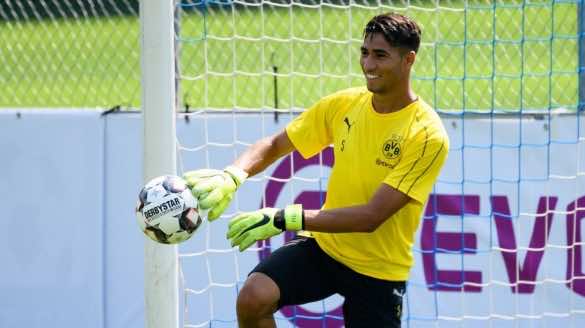 In his first game, the Atlas Lion scored the third goal of the match, making his coach very proud of him.

Dortmund dominated Nuremberg (7-0), on the fifth day of the Bundesliga, Wednesday, September 26.

Will Hakimi become a key player in the German club? According to Dortmund’s coach, he is on the right track.

“He played very well. I can see that he likes to play offensive. He is very young; he is 19 years old. He has worked very well and he is improving. He has a great future and a lot of potential to improve,” said Favre during a press conference.

“He has great qualities. He is fast; he knows how to dribble, and he is comfortable in the one to one confrontations. It was very good for his first match,” he added.

Before joining the German club, Hakimi had a great season with his club Real Madrid. He became the first Moroccan footballer to win the Champions League.

Hakimi made his official debut at the Santiago Bernabeu in October 2017. He has since become one of Morocco’s most important players, proving his worth alongside the Atlas Lions during the 2018 World Cup in Russia.