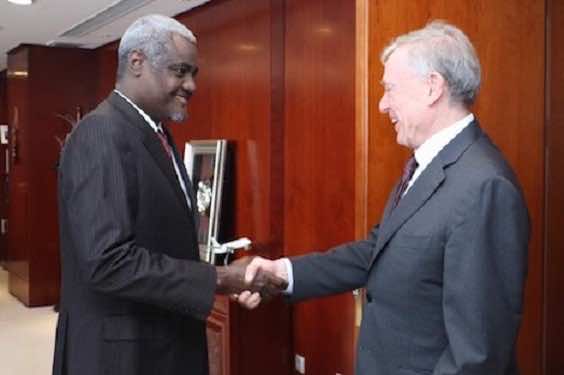 A statement from the AU noted that the officials “exchanged views on how best to advance the resolution of the conflict of Western Sahara.”

Kohler, however, knows Morocco’s firm position that the conflict should be resolved within the scope of the UN and not the African Union.

Morocco’s foreign affairs minister, Nasser Bourita, made this clear during the 31st African Union Summit in Nouakchott, asserting that the “resolution of the Sahara conflict is in New York and not in Addis Ababa.”

In January, Kohler held a similar talk with Faki about the Western Sahara conflict, hoping to give the AU an opportunity to propose solutions to the conflict.

Faki, who assumed the AU office in July 2017, submitted a report to the Pan-African organization at the 31st AU summit, expressing full support for the UN-led political process to bring the conflict to an end.

The document also expressed the AU’s satisfaction with the efforts of the UN secretary-general, Antonio Guterres, and his envoy Kohler.

Both Polisario and its main diplomatic and military champion, Algeria, lobbied for members of the AU to have a say in the conflict. On the margins of the UN General Assembly, Kohler has also met representatives of Mauritania and Algeria in regards to the conflict. After his meetings with the foreign ministers of the two countries, Kohler sent invitations to Morocco, Mauritania, Algeria, and the Polisario Front.

The invitations aim to convene all of the parties at a round table in December in Geneva to discuss a possible framework that would serve as a basis for future negotiations. All parties should respond to the invitation by October 20.

Analysts says that Morocco is unlikely to send a senior representative unless Algeria attends as a fully-participating party. Morocco’s position is that it will not negotiate with Polisario alone because the separatist group is not free and cannot take a stance without checking with Algeria.

Moroccan political expert on Western Sahara, Abdel Fattah El Fatihi, told Morocco World News that Kohler might take the Geneva meeting as a preliminary gathering to “agree on negotiation criteria, especially since Morocco cannot trust a non-independent party that periodically threatens war, does not comply with UN resolutions, and has no right to represent” Sahrawis, referring to the Polisario Front.

The analyst also gave MWN two hypotheses on why Kohler has not met with Morocco’s foreign minister during UNGA.

First, he said, it may be because Kohler already knows Morocco’s position and conditions: Morocco will accept no solution that does not respect Morocco’s sovereignty, and Algeria must be present in negotiations as a main party, not an observer.

Second, it may signal a crisis with the UN envoy “because of his positions that deviate from Morocco’s.”