Rabat- Bassima Hakkaoui has postponed an award ceremony at her ministry’s headquarters following the death of blind protester who fell from its rooftop. 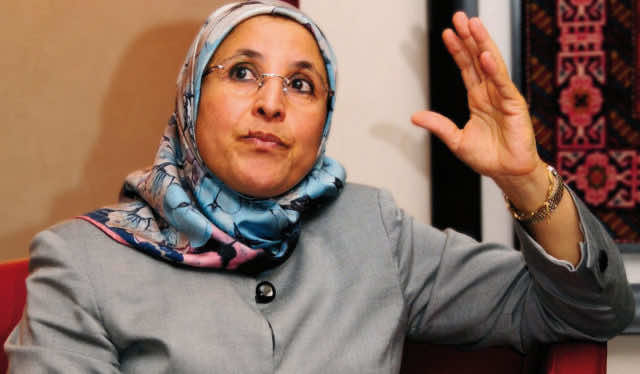 Rabat- Bassima Hakkaoui has postponed an award ceremony at her ministry’s headquarters following the death of blind protester who fell from its rooftop.

Minister of Family and Solidarity Bassima Hakkaoui said Monday in a Facebook post that her ministry will postpone the women’s 4th excellence award ceremony, scheduled for Wednesday, to a later date.

The postponement was “taking into consideration the painful incident that took place at the ministry headquarters yesterday,” she wrote.

Hakkaoui’s statement added salt to the wounds of angry Moroccan commenters on social media, who deemed it “insensitive.”

On Sunday, 25-year-old Saber El Haloui fell off the ministry’s roof during a sit-in. The sit-in was organized by a group of blind protesters calling for jobs and began September 26.

Many of El Haloui’s fellow protesters told Akhbar Alyaoum newspaper that he was speaking on the phone with his family on the rear side of the rooftops when his foot slipped. Forensics confirmed that the cause of death was not suicide.

The protesters have been decrying the “injustice,” “lies,” and “false promises” of Hakkaoui, who had already said that their requests were being processed.

The minister said that the protesters agreed to suspend their sit-in on Friday, October 5, however the minister was surprised to find them still at the ministry in the following days.

The protesters, however, shared a different version of the story, saying that Hakkaoui did not care about them or cooperate with them.

“You do not scare me; your protests are random …I am a woman of iron,’’ Hakkaoui allegedly stated, according to one protester.

The protesters hold Hakkaoui responsible for El Haloui’s death, rejecting her condolences via a Facebook post. She wrote: “We wish to express our deep sorrow at this painful incident.”

The protesters were not the only ones who expressed their rage at Hakkaoui. Many Moroccans criticized the minister and her Facebook condolences.

The blind men, initially calling for fair opportunities and integration into job sectors, broke into the ministry’s headquarters in Agdal, a neighborhood of Rabat, early on September 26.

The National Coordination for the Disabled, Unemployed Degree-Holders allegedly organized the break-in.

During their protests, the men threatened to jump off the roof and burn themselves alive if their calls to be employed and for “dignity” and “better living conditions” were not answered.

Dozens of blind protesters are currently leading a protest within the protest. They are holding an open sit-in on the ministry’s roof and in front of its doors, calling for both fair opportunities and justice for the “martyred” Saber El Haloui.

The incident represents yet another social and political crisis. Hakkaoui’s controversy comes at a time when the Moroccan government is dealing with criticism over the recent death of Hayat Belkacem. The 20-year-old woman was killed by navy gunfire while aboard a Spanish go-fast boat trying to cross the Mediterranean. 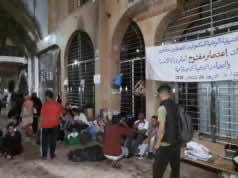 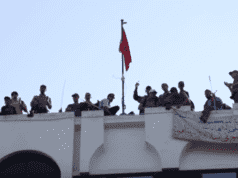