Rabat - Morocco and the United States were the only two countries invited to take part in a summit of the European Union’s G6 in Lyon. 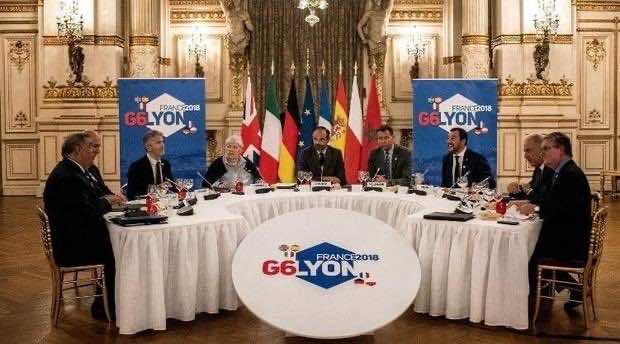 Rabat – Morocco and the United States were the only two countries invited to take part in a summit of the European Union’s G6 in Lyon.

Morocco’s Minister of Interior Abdelouafi Laftit represented Morocco during a summit of the interior ministers of the EU’s six biggest countries on terrorism and migration.

The summit, which kicked off Monday, marks the participation of France, Germany, the UK, Spain, Italy, and Poland.

Morocco’s participation represents a recognition of its efforts to tackle border and migration issues as well as terrorism.

The talks also discussed ways to ensure stability in the Sahel region, which represents a threat to the world.

Several security officials, including Morocco’s head of the Central Bureau of Judicial Investigation (BCIJ) Abdelhak Khiame, have warned the world of the situation in the Sahel, which has become a safe zone for criminal networks.

In October 2017, the US pledged financial support to the Group of Five Sahel States (G5 Sahel), Mauritania, Mali, Burkina Faso, Niger, and Chad, to counter the growing terror threat in West Africa.

Morocco’s participation in the G6 aims also to show commitment to its role of handling migration issues in the country and overseas.

Read Also: US Touts Partnership with Morocco against Terror Threats

A transit country for migrants, Morocco is promising to end the threat posed by migration networks and trafficking of humans from Morocco to Europe.

Spain is also pressuring the EU to meet Morocco’s demands and provide it with equipment to control migration.

Akhbar Al Yaoum newspaper reported on October 8 that Spanish authorities unveiled the existence of a human trafficking network that could traffic 200 Moroccans through family cars at the land border with the Spanish enclaves of Ceuta and Melilla.